Men will be Boys

Boys will be boys. For three months every year the Marco Island’s Senior Softball League literally turns men into boys. This year 165 men are registered to play on one of 12 teams. It all started in 1998, when columnist Roy Sanders from the Eagle wrote a piece saying “wouldn’t it be nice to get together and throw the ball around?” A week later 22 “boys” came to the field and started the league with two teams; Publix and Winn Dixie.

Now there are two divisions for the over 55 guys to compete; the Island league and the Marco league. They start playing the second week of January through play offs in March. Some of the “boys” are 87 years old. Pat Reese was one of those who first played. Today he manages CJ’s and he umpires. “This field was a cow pasture back then, filled with weeds, no fences, nothing”, explains Reese.

Murphe Knapke, from Northern Ohio, plays for Casa Mia restaurant and says he can’t wait to get to Marco every January because “I become a kid again.” It takes me back to sand lot baseball when I was kid. It’s a thrill to be here.” Each of the divisions offers competitive baseball but the Island league is much faster and more intense. The guys who play get hurt all the time or play until they can’t walk. No matter what league you play in, after the game the guys shake hands and go drink beer at one of the league’s sponsors.

Jack Evans hails from Boston and plays for Rookies. Evans says, “it offers a sense of fellowship. The guys are great and it spreads to a great 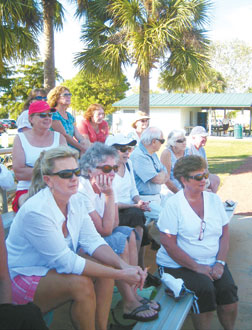 Rooting for their teams.

social life. It really is something special.”

The fan base for Senior baseball has also grown throughout the years. It is becoming an event for those who just like to come to the ball park and watch baseball.

George and Phyllis Erickson from St. Joseph, Michigan have been fans since the first full year. As George explains, “it’s entertaining and competitive. You get to know the players. It’s fun.”

Jack Schmitt, 78, from Spring Grove, Illinois, says, “I used to go fishing but now I come here.” Schmitt also helps in the announcer’s booth, running the scoreboard. “I love it,” he says.

Sharon Brooks was the first female coach in the league and perhaps knows more about the game of baseball than anyone playing, according to a number of players. The first year she coached her team won the title. “I love beating my husband’s team,” she states with a smile.

Seventy-four year old, Tony Giardino, who played for the New York Yankees in the minor leagues, has been associated with organized baseball for more than 60 years. He is one of the most liked umpires within the league. Giardino says his greatest thrill was making New York State’s All State football team back in 1955. Today his thrills come from calling balls and strikes in both of Marco’s leagues.

Mark Nahabedian is an 87 year old Purple Heart recipient from World War II. He’s been playing for eight years and thinks, “playing offers such a great sense of camaraderie. “I feel lucky to be alive” after surviving 10 months in the hospital and three surgeries to repair his war wounds. “These guys make me feel alive and they are always so good to me,” he 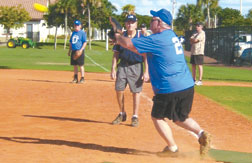 Tom Porter, from Chicago, plays for Casa Mia and says, “I can’t wait for the season to begin and can’t wait for it to end.” Porter adds, “a lot of guys who play get hurt every day and at the end of the season everyone is always sore.”

The league has ten board members who are elected every year by the players and tons of volunteers to make sure the league runs smoothly. “Anyone who wants to help out is always welcome,” adds Bill Moors. “Just stop by the field and look me up.”

Playoffs begin next week. Trophies are awarded in each league, one for the best record for the season’s play and the other for the playoffs. These trophies offer bragging rights for the next year and the desire to win it again “It’s what we play for,” emphasizes Jimmy Cueves, from the Sandbar team.

For some, the Marco Island Senior Softball program may offer the “Fountain of Youth” but to all it offers a fun way of life, competition and a feeling of caring for all of those who play.

Pat Reese may have summed it best, saying, “we have a guy playing who has Alzheimer’s disease and he has to be led around all day but when he crosses those chalk lines of the baseball field with a glove in his hand he knows he has to catch the ball when it’s hit or thrown to him while he plays first base.”

If you want more information about the Senior Softball program you can go on-line at marcoislandseniorsoftball.com and find a list of all teams, players and schedules. And remember you are always welcome to come to the ball park to watch some fun baseball.