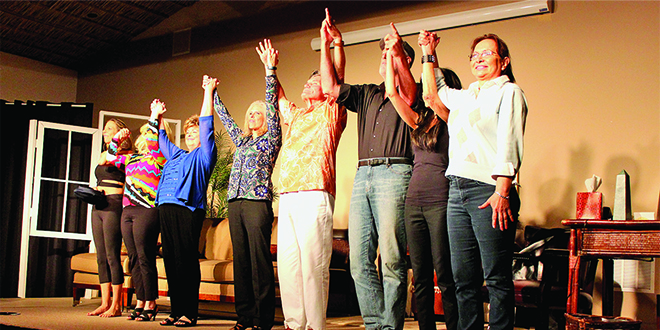 The Island Theater Company and Clausen Properties Inc. presented its opening week of “Men Are Dogs” on March 16 – 19. The two-hour one stage set show was brilliantly casted with local actors with years of experience on stage. This was the first four-day run of the play as it will also show later in April. Joseph Simonella, the playwright, will be at the April showing to greet the audience.

The comedy follows the character Dr. Cecilia Monahan, played by Diana Black, a successful psychologist who, among many sessions, runs a support group for single and divorced women. Her ensemble of neurotic patients provided the action when a “volunteer” role-player becomes the hapless victim of their rage. The support group consisted of characters Allison Taylor played by Abby Yetter, Loretta Morris played by Monica Sooy, Madeline Weinberg played by Carol Clarke, Jane Rudolph played by Maria Tobin. The “volunteer” role-player was the pompous Tony Rumson played by John Moulton and the suave Bob Crowley played by Ray Kane. Each character had unique personalities that brought along plenty of humorous baggage.

Right before opening night, due to a cast member falling 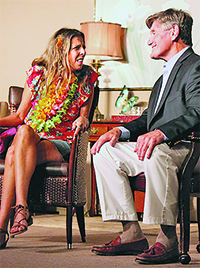 ill, Director Anne Megna stepped into the role of Rose, Dr. Monahan’s wisecracking live-in mom who offers unsolicited dating advice. From coaching the actors to deliver their lines to bringing them to life herself, Megna complemented the cast with her spirit of wittiness. Megna is a local actor and director and has been involved in community theater for over 56 years.

The two-act play had fun transitional music and catchy one-liners keeping the audience entertained from start to finish. The audience cheered as the actors gave their bows. Overall, this was a great local show to catch, or “fetch.”

“Men Are Dogs” will be performed again at the Rose History Auditorium, 180 S. Heathwood, Marco Island on April 19-23. Show times are at 7:30 PM with the last matinee show April 23 at 2:30 PM. Playwright Simonella will be in attendance for a meet and greet after the play.

The ITC’s mission is to bring together the community to share ideas and other artistic performance ventures, under one roof while seeking to produce quality entertainment in an atmosphere of art, tolerance, creativity and fun.

Visit www.theateronmarco.com or call 239-394-0080 to find out information on upcoming shows.