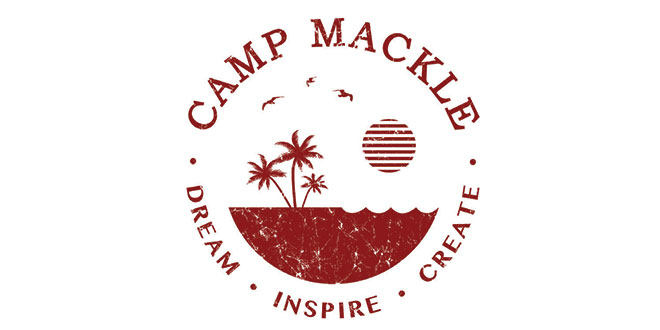 This was a record summer for Camp Mackle – with 230 registered campers.

A big part of what makes Camp Mackle such a success are the counselors and LITs who devote their summer to making sure the campers have fun.

We sat down with two counselors and two LITs to find out what brings them to Camp Mackle each year.

Kendall, 19, is a junior at the University of Southern Florida in Tampa. She is studying behavioral health, with a focus on children’s mental health. She is thinking about child psychology as a career.

When the kids hear Kendall is having her picture taken for Coastal Breeze, they crowd around her to get in the shot. The Tommie Barfield fifth graders are part of Group B, Kendall is their counselor this summer.

Although Kendall has only lived on the island for two years, she is accustomed to small town living, having 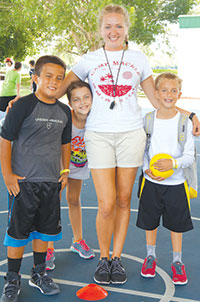 moved here with her family from another small town in Ohio. Her brother Hans is a senior at Marco Island Academy.

Kendall says that this is the “most fun job ever. I get to play every day.” She works retail during the school year. “This is so much better” she tells me.

On a typical day, counselor Megan Freel, age 21, leads her group in show and tell. The kids sit in a circle, each clutching a prized item to share with the group. The kids take turns standing in the middle of the circle and telling the other campers about their cherished possession. Megan draws out the shyer kids with questions. “Why is it so special to you?” and “Who gave it you?”

Megan, counselor for Group A (campers in kindergarten through second grade) tells me “it’s so much fun, I wouldn’t trade it for anything.” Megan spent most of the summer commuting from Estero, close to an hour drive each way,

for a job she loves. Megan is graduating Florida Gulf Coast University in December, with a degree in elementary education. She wants to go on to teach in the Collier or Lee County Public Schools.

She says that she was nervous when she interviewed for the Camp Mackle position, but that now “she can’t imagine not doing it.”

The day begins at 7:30 AM on the playground, and ends at 6:30 PM after the kids leave. Her energy and love of the job seem to carry her through the long day effortlessly.

The best part of her summer at Camp Mackle? Without skipping a beat- “Totally the kids!” she exclaims.

In the midst of a game, LIT Brian Kocak is on the basketball court with the campers, playing hard despite the heat. 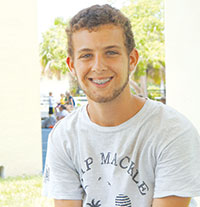 requirement, after only one year of high school under his belt.

Brian is an only child who loves kids. He has spent his whole life on Marco Island, attending both Tommie Barfield and MICMS. His parents Laurie and Brian Kocak are both IBR realtors on the island.

Brian worked with Group B this summer, campers from third to fifth grade. His favorite activities – soccer and dodgeball. There was no sitting on the sidelines- Brian played alongside the campers all summer. A responsible sportsman and LIT, Brian also made sure campers took frequent water breaks in the heat.

Brian tells us that he enjoyed the summer so much that he will do it again. And the best part about being an LIT at Camp Mackle? “Being active and playing sports.”

This is Cody Webb’s first year as a Leader in Training (LIT) at Camp Mackle. LITs are high school students, grades 9-12, who receive volunteer hours for their work at the camp. 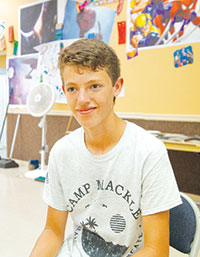 When we ask Cody why he wanted to be an LIT, he explains that he grew up with cousins- a lot of kids- and that he enjoyed spending time with them.

Cody also has a younger brother Justin, who is 14.

All Lely High School students, Cody included, need 100 volunteer hours to graduate. Most students earn the 100 hours over the course of four years. Cody, not yet starting his second year at Lely, has already topped 200 hours.

One of the many things that makes Cody such an asset to Camp Mackle is his love of sports. Cody’s father Eddie Webb coached a lot of sport teams, and Cody grew up playing. Cody is currently on the Lely High School lacrosse and golf teams.

Cody has lived on the island since first grade, attending Tommie Barfield Elementary and Marco Island Charter Middle School (MICMS). The best part about his job at Camp Mackle this summer? “Being able to play with the kids,” he says, especially soccer.