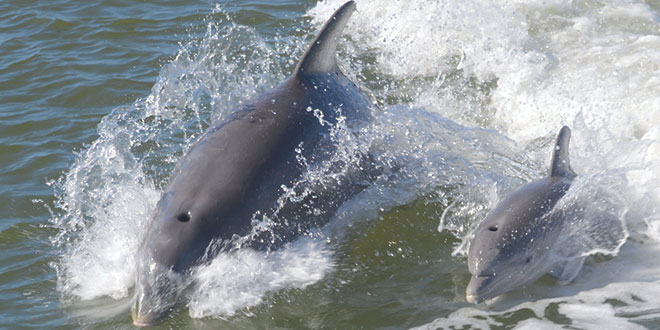 Cosmo and her baby Honeymoon play in a wave. PHOTOS BY BOB MCCONVILLE

Freedom. Honeymoon. Little Bear. These words do not describe a mountain getaway for newlyweds. They are, instead, the names of the first three baby dolphins seen in the Marco Island area this fall. This is birthing season for the bottle nosed dolphins in this section of the world, and we are hoping to see a few more “Young of Year” (YOY) over the next several months.

As well as being an educational ecotour, the dolphin survey team onboard the Dolphin Explorer takes pride in monitoring the birth statistics in the area; which one is the mom, how many young has she produced, what is the survival rate of the newborn and additional information that may provide some insight to the population in our area waters.

Of the above mentioned YOYs, Freedom was the baby we most expected this season. An adult female can give birth about every three years and Giza, Freedom’s mom, was right on schedule. She has produced a newborn in 2006, 2009, 2012, and again this year. What really alerted us to the possibility that Giza was pregnant was the behavior of her three-year-old, Sammy. Calves in this section of the world will stay with their mothers for three years or longer. Giza was seen without Sammy when that little one was only thirty-three months old. At first there was concern that something may have happened to Sammy, but we finally had a sighting of this youngster without mom around. 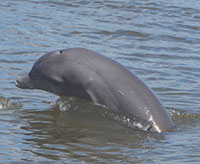 Two-month-old Freedom pops up for a look.

Just a few months later Giza did indeed give birth to Freedom. How did this YOY get its name? Many of our newborn dolphins are named by guests on our boat at the first sighting. This one was initially seen on September 11, a special day in U.S. history, and the passengers agreed that Freedom was the perfect name.

We’ve been performing our survey work for nearly ten years in the Marco Island area, and we met Giza’s first known calf, Sintas, in the fall of 2006. Three years later Doubledip was born, and in 2012 Sammy came along.

All of Giza’s known calves are still alive and in the area.

This is not the case for all YOYs. The fall of 2014 saw four newborn come along from adult females who are residents of these waters. Unfortunately only one made it to its first birthday. There is no conclusive evidence regarding the cause of death of the other three young of year, but several theories come to mind. There are sharks in our waters and baby dolphins would be in danger because of their size.

With many species throughout the animal kingdom, it is not uncommon for an adult male to dispose of the young in order to have access to the adult female for mating purposes and, in some societies, males may see a newborn as a threat to its food supply. There is also a possibility that a disease of some type could cause

death of a young.

One adult female has given birth in 2008, 2011 and 2014 and none of her young have survived. A theory here is that this mom may not be producing milk properly to feed her young.

As for the other two newborn, Honeymoon’s mom, Cosmo, has successfully raised her other calf, Hunter, to sub-adult status. We have high hopes that Cosmo’s abilities as a mom might give Honeymoon a great start in life.

Little Bear, offspring of Mama Bear, is spending time at the entrance to the Gulf of Mexico, a bit further away from the other youngsters. We are aware of other moms and babies in that vicinity, such as Crystal and Mica, that are doing well.

Several other females are on our list to give birth this fall, but only time will tell. It is always exciting to be on the water at this time of year, hoping to see a brand new baby.

Join Bob at 7 PM on November 19 at the Rose History Auditorium for a presentation about how young dolphins survive their first three years of life. MIHS members and Marco Island Academy students and parents are free. A $5 donation is requested for all other guests.

Bob is a naturalist on board the Dolphin Explorer and also owner of Stepping Stone Ecotours, an educational experience in the Big Cypress area. He is a member of the Florida Society for Ethical Ecotourism. Bob loves his wife very much!