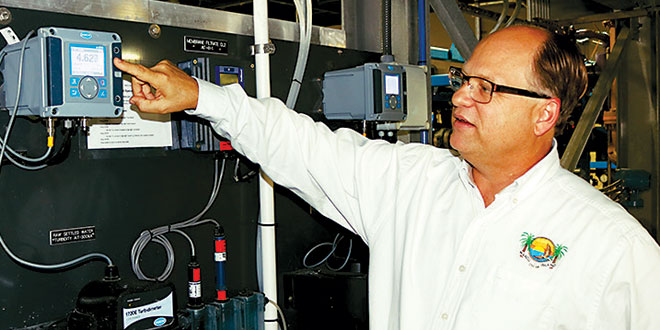 Jeff Poteet shows some of the equipment that is critical to monitoring the quality of our fresh water.

Marco Island is a great community. This is a series that profiles some of those people that help make it that way.

Meet Jeff Poteet. Jeff is the General Manager of the Water and Sewer Department of Marco Island. He started with the utility in June of 1992 as an operator trainee. A few licenses and a couple degrees later, Jeff took on his current role in 2010.

When asked to describe his job, Jeff responds: “My number one focus is to protect public health. The water industry, in general in the United States, does such a good job, it is sometimes taken for granted. That’s not the case in many other places around the world. Here on Marco, we strive to provide the best quality drinking water possible for the residents and visitors.”

Doing that job is not an easy task. A major challenge for Jeff and his team is that Marco Island has one of the highest population fluxes in the nation. The population varies by approximately 70% between seasons, and that is challenge in many regards.

“We have 69 people in our department and this team is outstanding,” says Jeff. “They are my heroes and we are lucky to have such dedication and expertise in every facet of our operations.”

During the low flow periods, Marco Island uses about 5 million gallons of fresh water each day. That number almost doubles during the winter peak season. Marco

Jeff shows off the view of the facility from atop one of the holding tanks. PHOTOS BY STEVE GIMMESTAD

Island is in a unique position in that all of its fresh water is from alternative water sources. This allows for some much needed latitude during dry spells and/or peak usage times. (But that discussion is best left for another article).

In addition to providing fresh water, Jeff’s department also processes the wastewater for the island. It is important to note that after processing the raw sewage, the end result meets all the same standards for drinking water. This processed water is what is used for irrigation on the island.

Jeff is from Marco Island and a proud graduate of Tommie Barfield Elementary. “I met a girl and ran away to Ohio where she had taken a job with Olive Garden. That’s where I started my advanced education.”

He studied at the University of Ohio and remains a faithful Buckeye fan. He married Babette (the girl mentioned above) and they had three children, twins Nathan and Joshua and Zachary. He worked three jobs and was attending school full-time during that time. The Poteets returned to Marco Island in 1992 where Jeff continued his education at the University of South Florida. They added to their family in 1998 when daughter Jordann was born.

Currently, Nathan is an administrator for Collier County Public Schools in Everglades City (one of the youngest to hold that position), Joshua is an EMT, Zachary is in the U.S. Navy serving in Bahrain, and Jordann is a high

Jon Pratt, Wastewater Manager (left), stands with Jeff at one of the computer monitoring stations.

school senior with an interest in theater.

A huge advocate for being involved in your chosen profession, Jeff works with the American Water Works Association, the Florida Water Environmental Association and the Florida Water and Pollution Control Operator’s Association (two years as president). This involvement goes a long way in providing education, resources and support in his role at the utility, and is one of the more rewarding aspects of his career.

In an alternate life, Jeff may have been a pool shark. His love of billiards goes back a long way and he has played in several leagues. His best team finish was second in a statewide Florida league. This will also be Jeff’s first year in a Fantasy Football League (which should be interesting).

I was fortunate enough to be given a tour of the facility and meet many of Jeff’s team. The expertise and professionalism of everyone I encountered was outstanding. There is a strong camaraderie among the team and a dedication to their jobs that we, as Marco Island residents, are fortunate to have. Jeff calls his team the Silent Sentinels as they are on the frontline of public safety.

In 2010, Jeff and his team were awarded Grand Prize for Environmental Sustainability from the American Academy of Environmental Engineers. A proud achievement for the entire community.