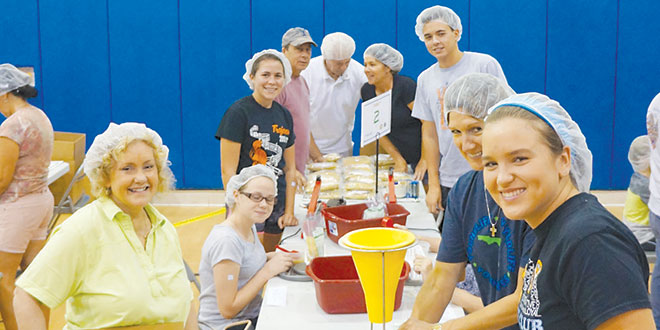 The 2015 Meals of Hope packaging event on November 14 was a monumental success. Over 550 volunteers packaged a record 232,000 meals in less than two hours. The group was also successful in achieving their 2015 goal of raising $45,000.

After the event, Meals of Hope gives the packaged meals away free of charge. A distribution network, which utilizes the Harry Chapin Food Bank and Collier Harvest, insures that the meals are given to needy children. The mission of Meals of Hope is to ensure that no child in Collier County misses even a single meal.

Neil “Captain Hope” Snyder has been the organizer of the event, working tirelessly with his team of 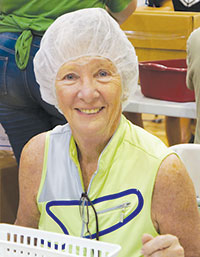 Volunteers made the packaging event a success.

volunteers year-round to raise funds through monthly After Five events on the island, selling 50-50 raffle tickets and fundraising. Marco Island’s Kiwanis Club and Sunrise and Noontime Rotary Clubs have been active supporters. The event has consistently grown each year.

Neil advises that he is “proudly passing the baton of Hope to our own, Bill Morris, who will continue the work to ensure that no child misses even a single meal.”

Bill Morris is an attorney on Marco Island with a long history of giving back to the community. He has been volunteering with Meals of Hope for three years. Coastal Breeze asked Bill about his new role as “Captain Bill.”

Why did you decide to lead the

This thing just looked like fun and I wanted to have a bigger part of the fun, so I volunteered to chair next year. There is such a strong team and Neil has done such a great job that it is more like stepping up as the CEO of a company than creating a fundraiser.

How will next year be different, if at all?

Most of next year will look the same, but we are always looking to improve and just had our post event review. Of course, we will again try to increase the number of meals we pack and look for even more community involvement.

As for Neil, he is a lot of fun 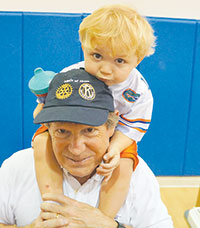 and very sincere. I value his friendship a lot and look forward to showing him that 232,000 meals packed this year was only a start. He did a great job of captaining the ship and moved this thing far beyond where most thought it could go.

As soon as the packing event ended, planning for 2016 was underway. The goals for next year’s packaging event are to raise $50,000, and package 250,000 meals in two hours. The group is seeking Friends of Hope to help raise much-needed funds to be used in their mission to end hunger.

For more information go to www.feedcollier.org. Fundraising for the Meals of Hope 2016 Packaging Event is underway, and donations in any amount are appreciated.