May Be Toughest Job in Goodland: Just another day at the office for Front Ellington, Part III 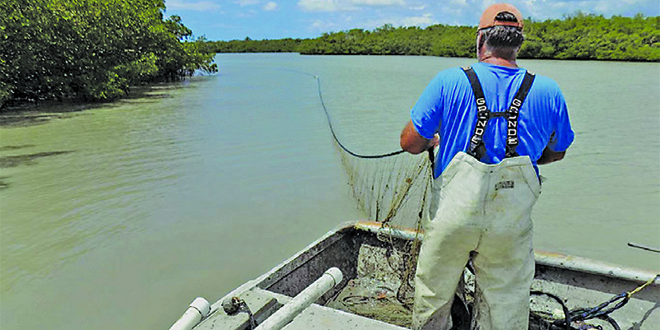 Pulling in the net is backbreaking work, even with relatively few fish, as compared to gill netting days. (See above photo.) It takes a lot of pulls in different spots to fill up the boxes.

On September 11 of last year, Frog Ellington took me along for a trip to the mullet grounds. I wanted to see firsthand how he did it. What I saw was an extremely strenuous and backbreaking operation. I have never been in an active coal mine, but can’t imagine that a miner works any harder than Frog did that day. It was almost like a one-man band, with Frog playing all the instruments. Unlike the gill net days, (pre-1995) when mostly winches were used to bring the nets and fish back on board, seine (SAYN) nets must be muscled in by hand. Pulling in 500 square yards (or more) of net, while pausing to disentangle the mullet, and throw them into the box, takes stamina – a lot of it. The whole process can be repeated multiple times during the day. Frog is the only fisherman left in Goodland who does this all year, five or six days a week – every week.

We left the dock around 12 noon on a sultry, partially overcast day. The tide had been ebbing for a couple hours. I thought I knew the waters fairly well around Goodland, but for a while, I was lost as we nosed up a small creek. Less than two miles from the dock, the creek opened up into a shallow bay in which the water seemed to be boiling. “There they are,” Frog announced, “That’s how you find ‘em. You can see ‘em jumping.” No one knows exactly why they jump, but most say it is to escape predators. Years ago, I asked Matt Finn about this when attending my first and last mullet fry. “Because they’re happy,” he replied. Be that as it may, these fish in this bay were not going to be happy for long. Frog scurried to the back of the boat and threw overboard one end of his net, held in place by a weight at the bottom with the other end buoyed by a float. (For how it’s done, see “Once a Waterman, Always a Waterman”, in the March 17 issue of Coastal Breeze News.) Running back to the forward console, he increased speed, and motored around the now really jumping mullet with the net paying out from the stern. When the circumvention was virtually complete the boat was left to drift, while Frog pulled in the net, which held what seemed to me to be a sparse catch of now unhappy fish. At least it was sparse compared to the photos of the huge hauls I had seen prior to the gillnet ban of 1995. Undismayed and nonplussed by the size of the catch, Frog pulled in what he had, started up the motor and ducked into a nearby creek, en route to another bay perhaps.

Frog had just demonstrated the most common method of seine netting mullet from a boat. Now he was about to demonstrate another. Before we could get to a bay he directed my gaze to the mangroves, which lined each side of the creek we were traversing. Up ahead on the right there was some commotion at the very edge of the mangroves. Closer inspection reflected jumping mullet along the mangrove line. They were practically in the mangrove roots. “These guys are safe,” I thought, “He’ll never get ‘em. Not enough room.” I have always rooted for the underdog. This reverie was interrupted by another race to the back of the boat by Frog. He had pulled up close to the mangroves and was throwing the weighted end of the seine right next to them. With that end held in place, he gunned the motor so that the net paid out about 20 feet from the mangroves so precluding any escape by the now apprehensive mullet. “They’ll still be safe if they stick to the mangroves. He has no way to get ‘em outta’ there,” I thought. Frog had built a nine-foot skiff in order to be able to deploy more than two nets (He is allowed two nets per boat.) Now he was going to put it to a different use. He wrestled the more than 100-pound skiff out of the cockpit and into the water. This stocky, muscular 60-year-old man, I’m guessing easily over 210 pounds, wearing boots and rubber coveralls, chambered into it and started poling along the mangrove line toward the weighted end of the net, a couple hundred feet up stream. I would have tipped it over after about 10 feet. There was no way I would get into a so-called boat that size. As he went, he pounded the water with his pole, as he explained later, “to scare the fish into the net.” It worked. The mullet, fleeing from the commotion at the edge the mangroves blundered into the net, where many were held fast. “[Before the gill net ban] We used 3¼” mesh and only caught the big ones.” Frog said in disgust, “Now, [restricted to 2” mesh], we catch every f_ _ _in’ thing. The fish bump up against the net instead of getting their heads caught in it.” After poling back to the boat, wrestling the skiff back on board, hauling in a fish laden net while simultaneously extricating the fish, it was time to look for another school of mullet. I have been around the block a few times and can’t recall ever having seen a man work that hard. He was sweating profusely (though not out of breath) and we had only completed two sets. I wondered how long he could keep this up. I would not find out on this day, but was aware that he had been doing this for 46 years.

Ominous thunderheads had been advancing toward us, spewing lightning and heavy showers. You could see them coming. Frog fired up the engine and headed back, running through showers much of the way. It was a cost of doing business. It was still raining when we got back to the dock and I hightailed it home to get out of the rain, leaving Frog to move the fish to his truck for delivery to his customers. He says he sells to restaurants and fish houses from Everglades City to Pine Island. Interestingly, none of his customers, with one exception, are in Goodland. Stan’s places an order with Frog each January for its renowned Mullet Festival. “We haven’t had mullet on the menu though, for 20 years,” says Steve Gober, the owner of Stan’s, “There is not much demand for it anymore.” Ray Bozicnik of the Little Bar says the same. There is one place in Goodland however, where you can still buy smoked mullet while supplies last. From July to November, which Patty Kirk says is the prime mullet season, some of the fishing fleet of Kirk’s Fish Market go for the mullet, which is then smoked and purveyed until sold out. “We just ran out the other day,” Patty told me. Frog has his own take on why he continues to have customers on the mainland, but none in Goodland. “It’s the old people who like the taste of mullet,” he says, “There’s still a lot of them over there [on the mainland]. Not so many over here. The younger set has kind of taken over.” If it’s up to Steve Gober, and it is, Frog will always have a berth for his boat in Goodland. “We go way back,” says Steve, “Frog comes through for me every Mullet Festival. He can use my dock (rent free) for as long as he wants.” From what I have seen, that may be a long time.

I have spent many hours with Frog in preparation for these articles. I am aware that not everyone sings his praises. Frog is a man of few words and during each workday remains wholly focused and dedicated to his work. I have found him to be open, engaging, and candid. I have come to enjoy his company. He is a man at peace with himself, providing for his family on his own terms in an environment which he knows, understands, and loves.

This is part three of a series on Frog Ellington and the mullet fishing industry. Parts one and two appear in the March 3rd and March 17th  editions of the Coastal Breeze News, and can be found at www.coastalbreezenews.com.