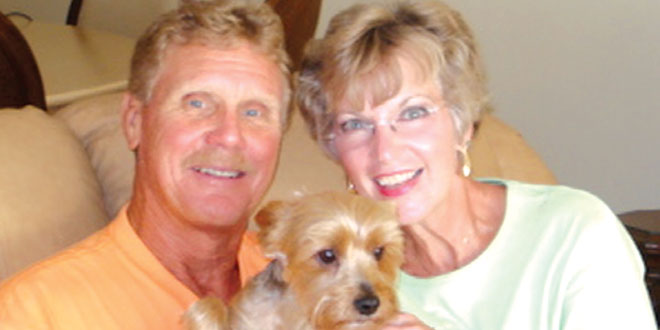 Philip and Maureen Chodaba are pictured with Buster. SUBMITTED PHOTOS

Maureen Chodaba is the ultimate breast cancer survivor. At 10 years old, she watched her grandmother fight and die from the dreaded disease. It was 1968. She also helped her mother fight it and survive twice — in 1978 and 1984.

“It was a scary thing,” Maureen admits. “I was very close to my grandmother; she lived with us. At the age of 10, I was faced with the word mastectomy.”

Then in 1995, she faced her own battle with breast cancer. At the time, 38-year-old Maureen was enjoying a quiet but full life, living and working as a dental hygienist near Poughkeepsie, NY, and owning her own home. She was single, and had just been introduced to a nice guy who had grown up in the Hudson Valley.

So, when she developed a scaly rash on the skin around the nipple of one of her breasts, Maureen was blindsided to find out it was a rare form of breast cancer known as Paget Disease of the Breast. It is so rare, in fact, that it took 10 months to get a proper diagnosis. “I was told, ‘Oh, it is nothing,’ but it got progressively worse,” she remembers.

By the time she received the diagnosis, doctors also found a lump in her breast that turned out to be Stage 2 breast cancer, and the infiltrating ductal carcinoma had spread to her lymph nodes. Maureen’s oncologist told her he would go after the cancer aggressively and “with the big guns,” and she quickly had a mastectomy followed by six months of chemotherapy.

Twenty years later, the now Marco Island resident is cancer free and working to help others fight the fight as the marketing and publicity chairwoman of the 2015 Relay for Life Marco Island — “One World, One Hope” — which will be held April 18, 2015, 11 AM-11PM, at Mackle Park. Maureen is following in her mother’s footsteps, as she also volunteered with the American Cancer Society.

“I learned (from my mom) that breast cancer didn’t necessarily mean a death sentence,” she says. “Watching my mother, I learned that life could be better after cancer; she loved every minute of her life.”

Still, when Maureen was diagnosed, she was haunted by her grandmother’s experience: “I remember her having the surgery, and she had radiation treatments. It was very different then what they are now, and then all of the sudden no more treatments. They told her she was fine, but the cancer had just spread out of control. I don’t think she ever really knew that she was dying of cancer, but I still remember the morning we got the call that she had passed.”

She adds, “When I was diagnosed, those were the darkest days. I asked, ‘Why me? Why at this age?’ I was still single.”

Even so, Maureen notes that she never really asked her oncologist what her chances for survival were. “I was healthy enough. I walked for fitness. I worked almost every single day through my chemo. Some days I didn’t feel like it, but I was there.”

She also was bolstered by the fact that her mom had come through the battle twice, and while scarred, she survived. “The first time mom was diagnosed, I remember she went in for the biopsy. In 1978, if you had a biopsy and it was malignant, you would wake up with a mastectomy. Then, she had another biopsy and had the other breast removed. She didn’t have chemo…It was terrible. All I remembered was what had happened to my grandmother, but mom was very open with me about her ordeal. I didn’t feel like there were any secrets at all.”

Combining all of the lessons learned from her grandmother, her mother and her herself, Maureen is a major advocate for sharing all three stories. “You never know when you tell someone your experience what impact it can have,” she explains. “I used to be part of an online network for dental hygienists, and I shared a post on it about Paget Disease. A dental hygienist from Utah saw it, was experiencing similar symptoms and went to her doctor. They caught it early. I never kept (my cancer) a secret because you just never know. The whole thing with cancer now is early diagnosis, and a diagnosis isn’t always a death sentence. Life goes on.”

Maureen knows this first hand as well. Remember the nice guy she met right before she was diagnosed with breast cancer? Well, he called her about a year-and-a-half after her diagnosis and asked her out on a date. “My hair had just started growing back in, and I looked like I had a crew cut,” she notes.

She went out with him, though, and now, she and Philip have been married 13 years, spending the last four of them on Marco. “I can’t really remember my thoughts after our first date, but I remember how I felt once we became serious,” Philip says. “I didn’t care if she had one breast, two breasts or three breasts. I just wanted to be with her.”

Together with Philip and their Yorkie, Buster, Maureen continues to monitor her health with annual mammograms: “Every year when I go for the mammogram, my husband goes with me, and he sits there in the car and waits for me to give him the thumbs-up. I really don’t get that nervous anymore. I just figure it is going to be what it is going to be.”

Philip believes that Maureen’s battle with breast cancer has given “her a real appreciation of life, health, faith, friendship and hope,” and she agrees. “You can’t take life for granted,” she says. “You have to cherish every moment.You have to be in charge of your own health, and when you think something is wrong, pursue it. It is okay to be an advocate for your health.

“I learned that life could definitely be better after breast cancer…There a lot more happy endings than there used to be.”

Things to Know about Paget Disease