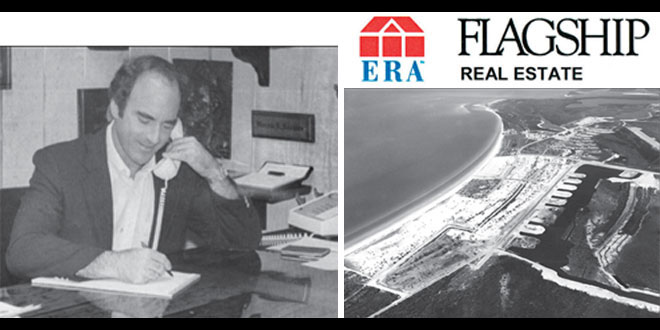 Marv Needles, owner of ERA Flagship Real Estate has seen Marco Island change dramatically nearly his 45 years as a permanent resident. He has been a part of that change, selling homes, building futures and creating a community through hard work and volunteerism. A long and successful career, Needles and his team at Flagship are excited to celebrate the 40th anniversary of the realty company. November 1, 2013, to the date, marks the amazing milestone.

Needles has a knack for remembering dates. He began his first job on Marco, working as a “go-fer” for the Deltona Corporation on July 4, 1969. Originally from Ohio, Needles was looking to move to Fort Myers or Fort Lauderdale. Somewhere in between, “I tripped onto Marco Island.” There was no Jolley Bridge, just the Goodland swing bridge. The lots were empty and the Winn Dixie had only opened ten days prior to his arrival. “I met someone that said they would give me a job, and Deltona hired me,” he states.

After a year in sales with Deltona, Needles moved on to work for another broker in 1971. “Back then you had to apprentice for two years before you could get your broker’s license.” That’s exactly what he did, and in 1973 he opened Flagship Realty, but initially under a different name – Port of Marco Realty.

But at the start in 1973, it was simply Needles and a hired high schooler as a part-time receptionist. Since then, under Flagship Homes, he has sold

Early in his real estate career, Needles met his wife Jayne, a Realtor as well out of Naples. Jayne ended up joining Flagship, originally in sales. Soon she moved into bookkeeping and accounting, retiring only four years ago.

Jayne isn’t the only member of the family who has enjoyed working with Marv. Both of their children, Scott and Stacy, are also in independent sales for the company.

“Like most kids, they couldn’t wait to get out of here after high school. After a few years, one by one, they came back and decided this would be a good place to start a family.” Both graduates of Florida State University, Needles describes his children as focused, hard working and team players.

Scott and Stacy have worked at Flagship for 18 and 16 years respectively. Additionally, Marv’s step-son (Jayne’s son), Dave Stevens is a major player in the commercial real estate community, in Naples.

The Market Then and Now

After 40 years, Needles has seen all ends of the spectrum in the real estate pricing market on Marco Island. “When I built my house, we paid $90,000 for the lot, it cost me $130,000 to build the house, and I told my wife, ‘you watch, someday this will be worth a million dollars.’ At the height (of the market) it got to be at about $2.5 million!”

In the early years, the typical size of a home was about 1,200 to 1500 square feet with either Deltona or Michigan Homes being the builders. Practical family homes, Deltona promoted Marco as a “second home community.”

“Before it was a more affordable community; middle of the road. Now it’s become an upscale community. We’re right on the heels of Naples which is kind of the place to be now.” Needles drills his point home with one home he sold in particular. “There was one year where I had the highest priced sale, I want to guess it was about 1975, and it $115,000 for a four-bedroom house on the (Marco) River on Polynesia Ct. Today the lot is worth close to $2 million.”

With major fluctuations in the housing market in the 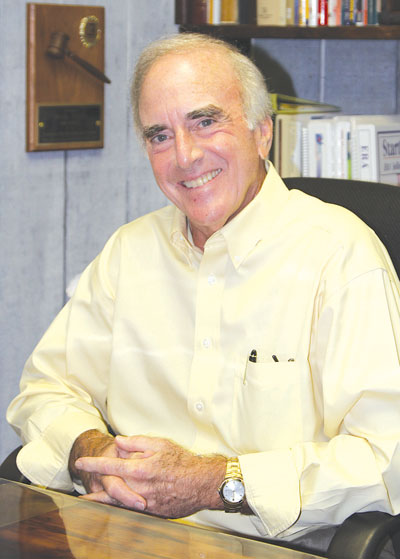 Marv Needles at his Flagship Realty office on Collier Boulevard. He built the plaza in 1982. PHOTO BY VAL SIMON

last ten years, Marco is seeing a bounce back, with more homes being both built and purchased. One trend Needles has noticed is an increase in purchases in the 1,500-1,800 square foot range. Buyers are choosing these homes where quick repairs and remodels can create an affordable and beautiful living space.

“I still see some of the (empty) lots on prime waterfront locations, I tell my clients that you’re never going to go wrong buying a piece of property like that. There’s no maintenance fees on it, so it can be a great investment,” adds Needles.

According to Needles, there are nearly 2,000 vacant home sites that have yet to be developed, which means Marco has quite a bit of growth left to it.

The early 70’s were a time of great change as Deltona’s campaign took off and “Paradise” was formed. The need for organizations and community centers grew and Needles, among others, helped answer that call.

In 1971, he joined the Naples Board of Realtors, but by 1974 the need for a Marco Island Board of Realtors was in order. Needles and about ten other people created the organization of which he has been president twice. In the beginning, “they were all ‘mom and pop’ type realtors. No big names.” Needles eventually secured the land and orchestrated the construction of the current building for the Board of Realtors.

It was an even bigger year for Needles in 1975. Through a bit of coaxing, Needles helped secure the current location of the Marco Island YMCA. First secured to be a youth center, Needles “was involved in a group that started that and we ended up approaching Deltona to get a deed saying (the land) always has to be designated for (the original plan).

In 1975, Needles also helped to form the Marco Island Chamber of Commerce. He was the first president, garnering 80 members in its first year. “It was kind of a grassroots thing. We were astonished” by its immediate success.

If that weren’t enough, one year later, in 1976, Needles became president of the first Rotary Club on Marco. He, with others, initiated a youth group called Interact, where the club worked with schools, fixing them up by painting playgrounds and other similar projects.

For 15 year, since the beginning of Marco’s cityhood, Needles served on the Planning Board for the city, ending his service this past year. “I enjoyed being part of the process. It was a very cohesive group. We didn’t always agree with each other, but we got things done.”

“I really have fun at what I’m doing. I like to train new agents and work with our existing sales agents. I’m not planning on giving this up any time soon,” Needles states enthusiastically. Even after selling hundreds of homes and building 170 through the Flagship name, he still has the same energy and passion as the day he started.

“I tell all the agents that I interview that I want this to be a cohesive organization. I don’t want to have an environment of turmoil so I try to choose people that I think will fit. So I enjoy coming to work. If I can help an agent or have the satisfaction of helping someone close a transaction, it’s a great feeling for me.”

Needles continues, “I don’t compete with (my agents). I do list and sell, but only when someone’s been referred specifically to me. I’m looking for all my agents to succeed.” And the proof is in the time put in. Margot Knauerhase is Needles’ longest agent. She’s worked for him for 28 years, first as a bookkeeper, then in rentals and soon went into sales where she’s been ever since.

As for the years on Marco and as owner of Flagship, Needles states, “I can only speak for my own personal experience, not even for the company, but I’ve had a great life here, great experiences with my kids, and I’ve just enjoyed everything that Marco has to offer. It’s nothing I could have ever expected.”