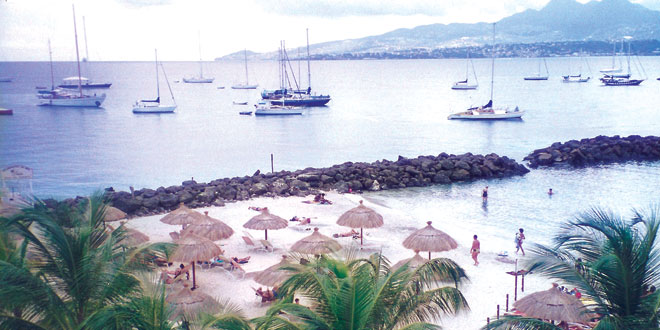 Unbelievable is the only way I can explain the contrast between Dominica and Martinique! The two islands are only 26 nautical miles apart in open passage, but the 76nm from the harbor of Portsmouth, Dominica to Fort de France, Martinique are worlds apart.

Nothing can compare to the civilities and attention to yachts found in the French Islands. Dominica provided a dinghy dock which consisted of a high cement bulkhead with old rubber tires attached so you could climb up to clear customs. In Anse Mitan, where we anchored in Martinique, there was a new, specially constructed, lighted dinghy dock. We chose not to anchor in downtown Fort de France as it was a bit exposed, crowded, in the way of the ferry and cruise ship traffic and hot. Instead we anchored off the resort village of Anse Mitan and took the ferry over to Fort de France. The anchorage was surrounded by lovely resort hotels and white sandy beaches. The charming village, surrounding a well-run marina, was a thriving community with restaurants, boutiques, sidewalk cafes, pleasant walks and benches on which to sit and watch the world go by. Another telling sign that we were on a French island was the differences between dock back home and here. Back home we would see dead fish floating around in the Sound. Here we saw baguettes instead! Now that’s French!

This is a very affluent area. The French government takes good care of its islands. All services are provided by the French government. Of all the many islands we have seen since beginning our journey, we liked the French islands best. One exception is Antigua which is independent, but at one time was part of the British Commonwealth.

The French sure know how to eat, play, and live well! They 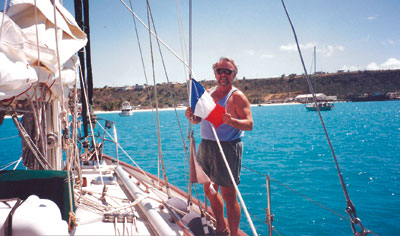 are very much aware that their economy is based on tourism and consequently, are most hospitable to visitors. Little English is spoken on these islands. No matter. Pantomime works very well and they, as well as Herman and I, enjoyed the game of communication.

One aspect of the French Island life style that we found a bit annoying was that there is no life between noon and 2:30 PM. Those hours do not exist. Everything closes for lunch. Maybe they have the better idea of what to do with that time. However, for folks like us who only have a short time there, it is most inconvenient. By the time we gather our weather reports in the morning, shower, launch the dinghy, dink to town, we have only one hour or so to walk the 3 or 4 blocks to our destination. This leaves little or no time to do any errands until 2:30 when shops open up again. By the time our errands are completed and many are not, it’s time to get back aboard and make dinner. Our productive day is definitely shortened. This was true for all of the French Islands: St Barts, Guadeloupe, Iles de Saints and Martinique.

For provisioning, we went to the Hyper Marche which is an enormous supermarket. The

fruits and vegetables are artfully arranged and color coordinated. Meat! Fresh meat! Except for St. Bart’s, all I have been able to buy is frozen meat. What do I choose? I must not forget the cheeses, pate, and assortment of breads. We did not buy any pates, but I did buy a small hunk of fresh Brie which was the best we ever had. On the other islands, I considered myself lucky if I could buy a fresh head of iceberg lettuce. Romaine lettuce was a luxury that was available only on a vegetable delivery day and even then it is something left to be desired. Now I was dizzy from trying to decide if I should buy Bib lettuce, Romaine lettuce, Red Leaf lettuce, Hyponic lettuce, local lettuce and more!

Fort de France is a great place for both fashionable shopping and souvenir hunting. There were two handcraft markets; one on The Savanne and one on the Rue de la Republique. You could buy anything from jewelry to varnished palm fruits. Half the artists were carvers from Haiti who made a large array of models from coconuts and balsa wood.These were available all through town.

Along with the artists’ goods were many stylish boutiques, most of them on the Rue Victor Hugo. There was a vast array of goods including elegant bathing suits, casual wear, evening wear, and men’s wear. Along these streets were fashions including Polo and Ralph Lauren lines. Mens’ wear was available as well. If you want less designer wear, there is a Printemps Department Store on the corner of Rue Autoine Siger and Rue Schoelocher. This is a first rate French department store located in the larger cities.

As with any destination, if you plan to stay a while, pay an early visit to

the tourist office. They will only answer your questions, but will fill your arms with maps, books, brochures, and a dining guide.

Interested in boats and hardware? There were businesses that that work with yachts, one being West Indies Nautic Distribution. They specialize in just a few items and offer them at excellent prices. Always either call ahead or check things out with the locals as things change all the time.

We decided to rent a car and toured the island. One of the more interesting places to visit was the village of St. Pierre. In 1902, Mt. Pelee erupted killing all but one of its 30,000 inhabitants. The sole survivor was the town drunk who was in jail at the time. Today, the ruins of the once flourishing center of St. Pierre remain as an ever present reminder of the awesome power of Mother Nature. Another attraction in St. Pierre, that was high on our list of places to visit, was the plantation of the De Paz Rummery. There are many rummeries here in Martinique, but we only had time to visit one. We also visited the Paul Gauguin museum in Anse Turin where he lived for some time. We were surprised at the number of his paintings that were in this small museum.

We really did not want to leave this island paradise, but time and weather dictated that we must push on if we were to reach Venezuela before hurricane season. Presently we were at Latitude 14 degrees. We were almost to the equator. No wonder it was so hot!