Mars returns to the evening 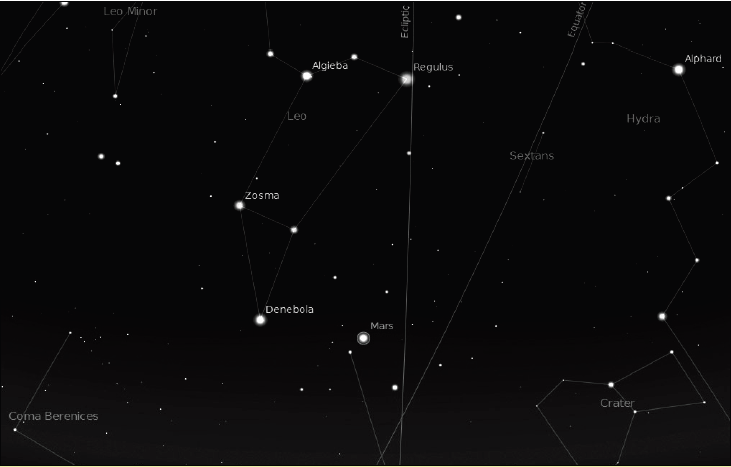 Tonight at 11:00 PM Mars is well clear of the horizon and appears in the constellation Leo, the Lion. Every night Mars is just a little brighter than the previous one as we draw closer to opposition on March 3; opposition happens when Mars and the Sun are 180 degrees apart.

Opposition is a great time to observe planets. Earth is as close as it will get on this orbit around the Sun. The planet appears both larger, brighter and is visible all night long. In the case of Mars, the change in brightness is the most dramatic of the outer planets; at modestly rare intervals it will even outshine Jupiter. The last time that occurred was in 2003 when a fortuitous set of circumstances brought our two planets closer than they have been in 60,000 years, although only very slightly less favorable oppositions happen every 15 to 17 years. This time, however, Earth and Mars will be much farther apart and Mars will only become about as bright as Sirius, but very red in color.

The time between oppositions of Mars is 780 days, or about 26 months – longer than any other planet. Although Earth has the inner, faster orbit around the Sun, Mars is actually not much slower and Earth takes over two years to “lap” Mars again. This compares to 13 months between oppositions for Jupiter and only 54 weeks for Saturn.

All planets move west to east across the sky, or to put it another way all planets revolve around the Sun counterclockwise. However, when Earth catches up to an outer planet and passes it, the planet temporarily moves (as seen from Earth) east to west. It’s exactly the same phenomenon as when you pass a slow car on the interstate – from the driver’s seat you see the passed car moving backwards even though you know in reality you both are roaring down the highway in the same direction. As you observe Mars over the next few months you can see this for yourself. By mid-April, Mars has moved backwards almost to Regulus before it turns around and moves forward again. Such backward motion is called by astronomers “retrograde”, normal forward motion is called “prograde”.

For your information, observing Mars with binoculars is not very useful, the planet is just too small! Even with powerful telescopes, Mars is something of a disappointment for beginners.