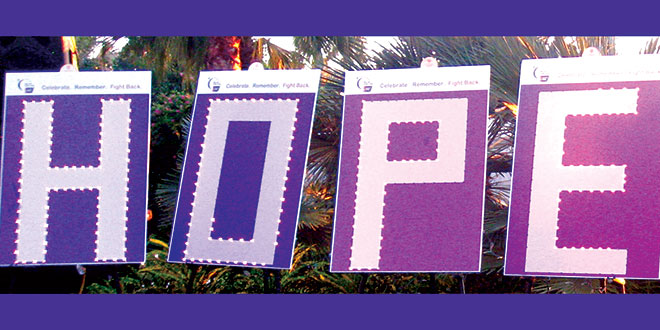 A cool breeze kissed the palm trees in the courtyard at the Marco Island Marriott Beach Resort. Josh Groban’s “You Raised Me Up” played softly in the background. People mixed and mingled quietly. Their conversations moved from warm greetings to happenings of the day to discussions of cancer.

All were anticipating the moving ceremony to come — the Seventh Annual Marriott Lights of Hope. Sponsored by the Marriott, its Spirt to Serve committee and American Cancer Society-Marco Island, it also serves as the kick-off for ACS’s Relay for Life campaign on Marco Island. This year’s 18-hour event will be held at Mackle Park on April 12-13.

The ceremony was dedicated to the memories of Mike Chalcraft, a former guest of the Marriott whose family had visited many times, and of Frances Quintana, a Marriott employee who just passed on Wednesday, Feb. 26, after a three-year battle with colon cancer. In total, more than 1,000 luminaries were positioned throughout the Marriott courtyard, lighting the way to a cure with memories of those who have fallen, those who still are fighting and those who survived.

“Tonight is about remembering,” Marriott’s Spirit to Serve Committee Chair Cathy Nelson told the audience. “It is also about celebrating, and many of these luminaries are lit for survivors — those who cancer-free and those who continue to have the courage to fight.”

The night also was about caregivers — any person who has provided care, both physical and emotional, to a cancer patient during treatment — and this was reflected in the story told by one couple who traveled the road of lymphoblastic leukemia as team, 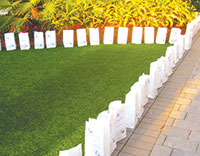 Kate Whitson described the life she and her husband, Randy, shared in pre-cancer 2012 as fairly normal. They were raising a child, going to work and enjoying he occasional date. “We were youngish, vibrant and healthy,” Kate remembered.

In reality, though, Randy hadn’t been feeling well for a while, and when they received his diagnosis, Kate made a calculated decision “to be hear and be involved, to push” their way through the cancer — all 100 days in the hospital and all through the chemotherapy, radiation and bone marrow transplant. “Life isn’t always fair or predictable,” she said. “Curling up and crying wasn’t going to change the circumstances.”

And push Kate did. With the help of her parents, Kate was able to hold down the home front — which also included their young son, Max — work when she could and be there for Randy every step of the way. Kate compared being a caregiver of a cancer patient to the instructions flight attendants give on an airplane about the emergency mask: Put your mask on first, and then help others around you.

“That is what it is like to be a caregiver. My only job was to focus on him. Family and friends took care of me and the rest of our lives. I knew as long as our son was cared for, the rest would work itself out. Caregivers need caregivers. No one should have to this alone,” said Kate.

Randy spoke of all the reasons he is considered a survivor now, but above all, he said he 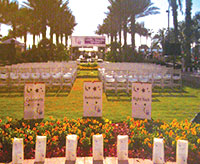 got through it because of Kate. “She was my biggest advocate,” he added. “Kate was more like a cancer partner. She stayed strong, and she never let me see her fear. She took care of everything.”

Kate and Randy also talked about the importance of the work done by the American Cancer Society and the funds raised by Relay for Life. For Randy, research conducted thanks to ACS in the 1960s led to the creation of a drug called Gleevec. This drug helped him beat cancer.

“ACS contributed to me being here,” Randy said. “We feel the need to give back.”

Because Randy was in the early stages of recovery during last year’s Relay for Life on Marco Island, he and Kate decided they would dedicate 2014 to participating. They each have their own teams, and they are enjoying the healthy competition. “We are having fun with it at home, and we know it is for a good, life-saving cause. The fact I am standing here today is a lot about what cancer doesn’t have to be…Let’s take the luck out of beating cancer,” Randy finished strong.

Lisa Honig, executive director American Cancer Society-Marco Island, summed up the importance of the ceremony and Relay for Life. “Every time I hear your story it resonates with me,” she said, looking at Randy and Kate. “We have to keep going because we want to speed the process up. You ask why? Think of Randy who before he was born the research was done to fight his cancer. If you think that dollar doesn’t matter, it really matters. Give a dollar. Give what you can. Every little bit helps.”