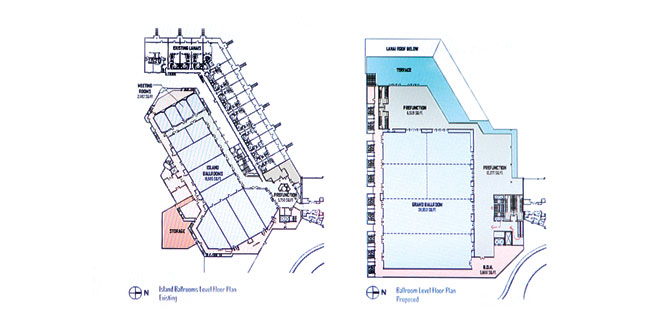 Rick Medwedeff went back to the drawing board. At an August meeting of the Marco Island Planning Board, the general manager of the Marco Island Marriott Beach Resort unveiled a proposed $150 million renovation project for the resort that raised some community concerns. He listened. He considered, reconsidered and made changes.

Now, he is ready to show the City of Marco Island and its residents the result. On Monday, November 25, 2013, at 5 pm, Medwedeff will hold a community-wide Town Hall meeting at the Marriott to show residents the revised plans and to dispel what he characterizes as a campaign of misinformation that has been circulating since the summer — specifically those assumptions that the renovation project really amounts to the construction of a convention center.

The Town Hall meeting is crucial for Medwedeff, his project and the community. The reason: Marriott International Inc. and resort owner, Mass Mutual, provided verbal approval to fund the project on November 1.

“I want as many residents of the island to come to the Town Hall meeting as possible,” insists Medwedeff. “A lot of misinformation has been shared in the community, and I want to educate the public. I am renovating my meeting space and expanding it within the footprint of – the property on the West Side of Collier Blvd….I am not interested in a convention center. Convention centers are run by cities. I am not interested in Marco Island running a convention center. There is no demand for it. We are not a market for that kind of demand.”

During the meeting, which will be held in the resort’s current meeting space and be accompanied by light refreshments, Medwedeff will make his case in a 40-minute presentation outlining the revised plans. He hopes to open a public dialogue about the project while showing Marco Islanders why the resort’s current 56,000 square feet of meeting space built 40 years ago is no longer competitive to new resort facilities. Currently, Marriott’s convention business encompasses 55 percent of the resort’s overall business.

The key change to the plan is the design and scope of the proposed one-tier parking structure. Originally, it was going to cover the length of the Marriott’s current parking lot and stretch 12 feet high. The revision minimizes the

Floor-to-ceiling glass walls will offer natural lighting and gorgeous views of the Gulf of Mexico.

The plan also will dedicate 28 parking spaces on the north end of the facility as neighborhood parking for Marco Island residents. These folks then would be able to use the public beach access point just north of the Madeira property. While the details of the arrangement are being worked out, Medwedeff says the neighborhood parking could possibly be governed by the city.

“We wanted to be as sensitive to the neighborhood as possible, so we asked how do we minimize this parking deck? We lowered the profile by three feet. Originally, we wanted to cover the entire lot. Now, just about half of it will be covered…We want to create something that is aesthetically pleasing and that does not Interfere with the neighborhood around us,” he explains.

The remaining details of the proposed renovation remain unchanged. The resort’s current convention, meeting and pre-function space will be reconfigured and some 30,000 square feet of space will be added. To meet current industry standards, spaces will be rectangular in shape with no columns or other obstructions to line of sight, and ceiling heights will be increased from 10 feet to 22 feet. Glass walls will open some spaces to views of the Gulf of Mexico and natural lighting. A mezzanine level off of the lobby will provide additional break-out rooms for meetings.

The construction of a new guest tower on top of the existing main structure will expand the Marriott’s guest rooms from 727 to 810. To complement the renovations, an indoor recreation facility and a floor-to-ceiling glass, roof-top restaurant also are planned. At completion, the project will propel the resort into the luxury tier with a rebranding to a JW Marriott property.

The project’s expected significant economic footprint remains the same as well: the creation of 97 new full-time equivalent jobs at the Marriott; 28,000 more room nights for the hotel each year; and the addition of $47 million to the hotel’s already established $152 million annual economic impact. The best part: Most of the new business will be generated in the island’s summertime off-season.

“My primary business is as a

Architectural renderings depicts beach side view of how new structures will blend with existing buildings.

hotel,” Medwedeff notes. “We are a hotel that has meeting space, and the only business we use our meeting space for is to fill hotel rooms…I don’t have enough quality meeting space…(With this project) we will hopefully be able to capture more business in the off-season when half of the population of the island is gone and local businesses struggle. These visitors will venture out from our property, and they will go to local restaurants and recreational facilities on the island. They will spend their money, and that is good for everybody.”

Still, the Town Hall meeting is not the only hurdle Medwedeff has to clear. He also must request two modifications to the Marriott’s current PUD from the City of Marco Island. He wants to begin the formal application process by the first Planning Board meeting in 2014. First, the city must approve the plan for the one-tier parking structure, which currently is not allowed in the PUD. Second, Medwedeff is seeking a 17-foot height variance for the new guest tower. The property’s PUD restricts structure heights to 100 feet. The new guest tower will bring the resort’s main structure to 117 feet. Its two existing guest towers are both 108 feet tall. Medwedeff points out that this new tower at 117 feet would be the 32nd highest building on the beach front of Marco Island.

Ultimately, Medwedeff wants to be able to bring the project before the Marco Island City Council in February for final approval in March. Construction, though, would not begin until May 2015, and would be set for completion by December 2016. The reason for the delay? The planning and permitting processes are very lengthy, he explains, but time also is needed because of group business commitments already on the Marriott’s books.

Based on recent encounters with the public about the project, Medwedeff is cautiously optimistic about the Town Hall meeting and the community’s response. “I have had several meetings with various groups, and I will tell you that the majority of responses have been very favorable when they know the facts,” he says. “That is why I want to hold this town hall meeting, so people can hear about the project from the horse’s mouth. Then, they can challenge me face-to-face on anything that they think is not appropriate.”