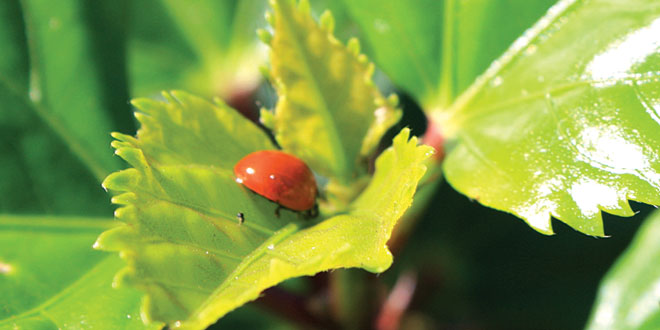 “I was a killer,” admits Jeane Lefebvre, Grounds Supervisor at the Marco Island Marriott Resort and Spa. “I thought if there was a bad bug, let’s shoot it. Anything I could spray, I would.” Recalling his early years, Lefebvre laughs as he describes his “180 degree turn” when it comes to the use of pesticides. Under the Master Gardener eye of Lefebvre, the Marriott’s grounds have been pesticide-free for 20 years. As Lefebvre battles the biggest pest invasion of his career – the spiraling whitefly – he shares his secrets for a pesticide-free landscape.

For 23 years, Jeane Lefebvre has cared for the 25 acres of Marriott greenery. “About 20 years ago [the Marriott] decided to stop using pesticides for all the obvious reasons. At a hotel, of course, if you have a mask on and a big sprayer fogging up the whole place, your guests are not going to be happy.” Spraying also meant releasing chemicals into the air and ground, which Lefebvre was not in favor of

Sooty mold coats plants covered in whitefly honeydew. It can be verydifficult to remove.

after realizing the effects it has on Marco’s water table.

“It dawned on me that [using pesticides] was really spitting in the wind. Not only is it bad for the environment, but you can only kill what you hit. Unless you can get the undersides of bushes and leaves, you will have survivors that will just lay more eggs.”

Lefebvre buys “good bugs” depending on what “bad bugs” he finds lurking in his terrain. “So I go about my business and I let the good bugs go and they find the bad bugs for me and eat them. At least that’s the plan, anyway!”

Ladybugs, one of the best “good bugs” out there, eat aphids; a specific mini-wasp is perfect for mealy bugs; a

predatory mite called Neoseiulus fallacis will take care of spider mites; the list goes on and on.

Lefebvre monitors his plants for “bad bugs” such as aphids and mealy bugs and looks to see if there are any coinciding “good bugs” in the area. If not, then he orders them. “As long as there’s something to eat, the good bugs will stick around and multiply. When there’s nothing left, they fly all over the island to find food elsewhere.”

Rich Lutz, Director of Engineering for the Marriott quips, “Our bugs are always flying away, but we are more than happy to share them.”

Now facing one of the worst infestations he has seen, Lefebvre still maintains confidence in his pesticide-free of system. The Rugose Spiraling Whitefly was first reported in Miami-Dade County in 2009 and “is believed to originate from Central America,” according to the University of Florida’s Institute of Food and Agricultural Sciences. The small, white winged insect seems to find most trees and shrubs to be a perfect host to lay its eggs. Using its 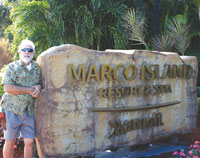 Jeane Lefebvre has been Grounds Supervisor at the Marco Island Marriott for 23 years.

needle-like teeth, it sucks nutrients from the bottom sides of leaves and then lays its eggs in a white, spiraling pattern, hence its name. The leaves a waxy coating on the leaves and they end up shriveling and dying as a result of nutrient loss.

The spiraling whitefly produces honeydew while laying its eggs. The clear, sugary substance coats any foliage underneath larger infested trees causing the growth of sooty mold. The mold turns black and covers the plants causing decreased photosynthesis and possible death.

“It’s an invasion,” explains Nancy Richie, Marco Island’s Environmental Specialist. “It’s something that everyone should know about.”

While the City of Marco Island has been inoculating a large number of trees for the whitefly, Lefebvre has ordered beetles to treat the problem. Their scientific name, Delphastus cataliniae. For $137 including shipping cost, the Marriott receives 1,000 beetles. Lefebvre releases them and then looks for signs that they are nesting in areas of whitefly invasion. It isn’t a fast process, but he’s already seeing signs of clean, new leaf growth on some of 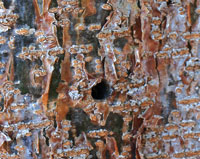 A hole at the base of a tree along Collier Boulevard indicates it has been inoculated by the city for whitefly.

Richie believes that it is “pretty neat that [the Marriott] isn’t using chemicals” to treat the whitefly. However, the City has seen such serious infestation throughout the island that it has opted to drill holes into trees to inoculate them with a chemical that should kill off the whitefly. “The sooty mold is incredibly difficult to clean. The city has even had to spend money to clean up benches and posts around the island. Public Works has even come up with a special type of power washer to clean the benches. It’s that messy.”

Preferring inoculation to any type of spray pesticide due to the same reasons Lefebvre mentioned, Richie is hoping that homeowners, condominiums and businesses will get involved in the fight against the whitefly and to research the benefits of Integrated Pest Management. The city offers information on the whitefly at its website, www.cityofmarcoisland.com and is willing to speak with homeowners about the issue. The Marriott is also willing to share its pesticide-free alternative with anyone interested. After all, they already share their bugs – the “good ones” anyway.