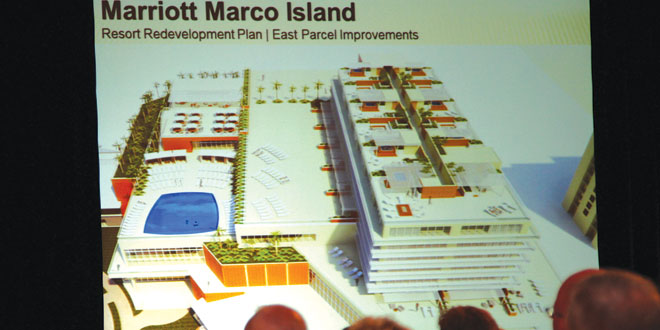 Alan Sandlin loves Rick Medwedeff’s plans for the proposed $150 million renovation to the Marco Island Marriott Beach Resort. The local realtor, who heads up Re/Max’s The Sandlin Team, believes the resort general manager’s project would be a coup for the Marco Island economy, especially when it comes to bringing in new residents — and buyers of real estate.

After all, Sandlin himself discovered Marco Island in 1977 thanks to a conference held at the hotel property now managed by Marriott International Inc. and owned by Mass Mutual. “I bet if you asked at least 40 percent of the people in this room found Marco Island because they visited the Marriott,” he noted after the Nov. 25 Town Hall meeting where Medwedeff presented his revised proposal to a packed house of Marco Island City Councilors and staffers, local business leaders and neighborhood residents.

According to the presentation, the project’s highlights will include:

• increasing the ceiling heights in the meeting space from 10 feet to 22 feet;

• a new rooftop restaurant with views of the open Gulf of Mexico;

• a new 20,000-square-foot indoor recreation center designed with families in mind and featuring activities such as virtual golf and bowling, as well as indoor laser tag; and

• a new single-level parking deck which will replace the existing tennis courts and a portion of the current parking lot and will bring the total number of spaces at the Marriott to 1,400. 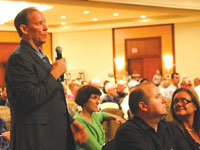 Neighbors wanted to be certain their access through a parking lot wall would remain intact.

and stretch 12 feet high. This plan raised concerns in the immediate neighborhood so changes were made. The revision minimizes the profile of the one-tier structure to 8 feet 8 inches and places the parking structure on the property currently occupied by the resort’s tennis courts. The rest of the parking lot will remain as is. The plan also dedicates 28 covered parking spaces on the north end of the facility as neighborhood parking for Marco Island residents and upgrades to the crosswalk at Maderia for public beach access.

Medwedeff echoed his statements to the Planning Board regarding the necessity and importance of the project to the Marriott: The resort’s current meeting space is inadequate, outdated and deficient, and is causing the Marriott to lose business. “This space was built 40 years ago, and it is just not competitive today,” he told the audience at the Town Hall meeting.

To be sure, there were plenty of questions and concerns from the Marriott’s neighbors. Most of them focused on the parking structure, its proposed height, its appearance, and the expected noise issues and lighting spill-over. Others expressed concern about the status of the maintenance area, the construction process and possible increased traffic on Collier Boulevard. Medwedeff answered each question and remained after the one-hour event to speak one-on-one with residents.

In the end, he touted the significance of the project’s expected economic footprint:

• the creation of 97 new full-time equivalent jobs at the Marriott;

• the addition of $46 million to the hotel’s already established $152 million annual economic impact;

• an increase of $500,000 in annual bed tax collections by Collier County; and

The best part: Most of the new business will be generated in the island’s summertime off-season.