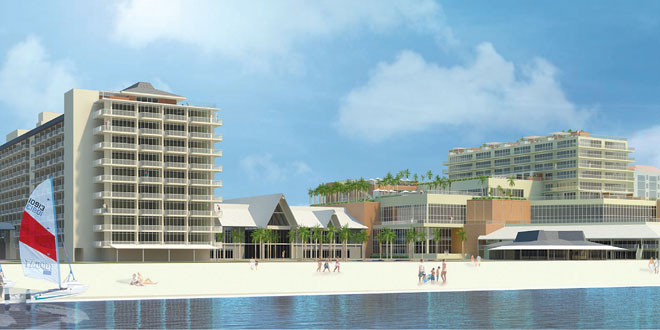 All in all, Rick Medwedeff was pleased with his recent presentation to the Marco Island Planning Board. The presentation was informative only, there was no vote sought, or made. The project is completely different from the proposal several years ago to build a convention center on the east side of Collier Boulevard.

“You go into a presentation like this expecting the worst,” noted the general manager of the Marco Island Marriott Beach Resort.

Last week, Medwedeff unveiled a new $150 million renovation project for the Marriott, which would add 31,000 square feet of convention space, 93 new guest rooms, a floor-to-ceiling glass, roof-top restaurant and a two-tier parking deck to the property. At completion, the project will create 97 new full-time equivalent jobs at the Marriott. It also will propel the resort into the luxury tier with a rebranding to a JW Marriott property.

While the information session engendered passionate objections from some residents, it also dispelled rumors and misinformation that not-so-quietly were circulating about the project. “I was pleasantly surprised by the overall feedback from the board and the community at large. I knew there was a lot of misinformation that had public opinion poised against us. I think some may have changed their minds,” he stated.

This is an aerial view of the proposed parking deck which will increase the number of parking spaces at the Marriott from 1,009 to roughly 1,400. SUBMITTED PHOTO

all of Collier County. However, there is one problem. Some 60 percent of this meeting and convention space is 30 years old, which Medwedeff contended, makes it woefully inadequate to meet the needs of today’s corporations and meeting planners.

According to Medwedeff, the problem with the existing space is threefold. First, the shape of the current space is wrong. Meeting planners want rectangular spaces to increase the flexibility of space and line-of-sight for audio-visual presentations. Second, the current ceiling heights are too low. While the industry standard now is between 20-24 feet, the ceilings in the Marriott’s space range from 10-14.5 feet.

Third, there simply is not enough space — meeting break-out rooms or pre-function — to meet client needs. The standard industry demands are 100 square feet of meeting space per guest room. At the Marriott, one will find just 58 square feet per guest room, Medwedeff noted.

“For us to stay competitive for the next 50 years, we have to address the lack of meeting space and the quality of our meeting space,” Medwedeff told a packed house at the Planning Board meeting. “Every year, we struggle more and more to book our space. Everyday, we become less competitive.”

Medwedeff went on to tell the audience that the space challenge has the greatest impact in Marriott’s shoulder off-season from May to December. In fact, the Marriott has lost significant business because of the space issues. For example, last year, Yamaha wanted to hold its new boating product launch at the Marriott, but low

The proposed parking deck will include new water, landscape and pedestrian features.

Marriott’s solution: tear down 45,000 square feet of current convention space and replace it with 75,000 square feet of new space. In the end, the Marriott will have a total of 87,000 square feet of meeting space with ceiling heights between 22-24 feet, as well 93 new guest rooms, bringing the total to 810 rooms. This part of the project is confined to the west side of Collier Boulevard. The projected height of the new structure would place the Marriott only 32nd in height among Marco Island buildings.

“We sell meeting space so we can occupy hotel rooms,” Medwedeff explained. “This is not a convention center. That is a stand-alone facility. This is an expansion of our meeting space to occupy our hotel rooms.”

The sticking point came when Medwedeff proposed double decking the Marriott’s current parking lot located on the east side of Collier Boulevard. Complete with a new water feature and elaborate landscaping, the parking deck would increase the number of parking spaces from 1,009 to 1,400.

Several residents who live adjacent to the parking lot attended the Planning Board meeting to contend that the Marriott would violate a 2001 agreement not to put any new structure on the east side of Collier Boulevard and hinted at legal battles to come if the Marriott does not change the plan.

“There is a parking problem on this island, and (the Marriott) needs to come up with a better plan. We already talked about a parking deck on

this island, and the residents said no,” said Ray Seward, chairman of the Marco Island Property Owners.

Planning Board Member Dr. Bill Trotter urged Medwedeff and his architect, Malcolm Berg, president EoA, to consider all alternatives, including underground parking and shuttling guests to and from Hammock Bay was bandied about.

After the meeting, Medwedeff explained that the increase in parking was in compliance with building codes which provide specific ratios available parking to space in a hotel. “If I didn’t have to increase my parking and spend $30 million on parking, I would choose not to. We will look at all possible angles,” he indicated.

Still, Medwedeff is reassured by responses like that of Dick Shanahan. Praising the project, Shanahan said, “I think there is something in this presentation for everybody. There is not a city in America that would not stand in line to get this JW Marriott program. We should all be in support of this to get this on the way and get it done.”

The next step for the project is funding. Medwedeff has high hopes that the hotel’s ownership group Mass Mutual/Cornerstone and Marriott management will step up. After all, the resort’s overall economic footprint is substantial at $152 million annually, and with the additions of the proposed project, that impact would increase by $46 million.

“Marriott is and has always been part of this community,” noted Medwedeff. “We want to have an opportunity to positively impact, not take away the feeling of this island. We will do everything in our power to meet both needs.”