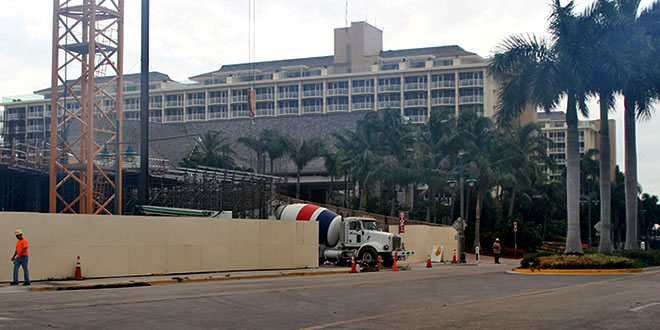 Upcoming construction at the Marco Island Marriott Beach Resort, Golf Club and Spa, will cause three scheduled road closures in front of the hotel’s location at 400 South Collier Boulevard.

Marco Island residents are advised that the southbound lanes of Collier Boulevard directly in front of the Marriott will be closed on the following targeted dates:

On each of these days, weather permitting, starting at 4 AM the Marriott will begin staging for construction, and will shut down the southbound lane of Collier Boulevard. Beginning at 5 AM, 75 concrete trucks will activate the pouring of the third floor of the new ballroom. The southbound lane will remain closed for a 12-hour period while construction takes place.

On each of these construction dates work should be completed by the afternoon of the same day. It is anticipated that both lanes of Collier Boulevard will be reopened for normal vehicle traffic at 4 PM.

The Marriott is in the process of a $250 million expansion and improvement project that began last May. Work is expected to be complete by the end of this year, and the Marriott transformed, in January 2017, to the more upscale J.W. Marriott brand. This will be the J.W. Marriott brand’s first beachfront resort in the continental United States.

Some of the projects already completed include renovations to the Marriott’s lobby and guest rooms, an expanded pool deck, improvements to the Hammock Bay Golf Course, the addition of Menchies frozen yoghurt, and the Maia and Ario restaurants. Also opened recently is the Kane Tiki Bar and Grill, which readers can learn more about in this issue of Coastal Breeze News.

Since the JW transformation project began last year, the Marriott has made efforts to keep Marco Islanders informed of any impact that its construction may cause to the community. However, plans can change based on weather or other factors. In the event of any significant rain delay the Marriott will communicate the new road closure dates. For the latest on traffic and road closures on Marco Island, follow the City of Marco Island @CityofMarcoISL and the Marco Island Police Department @Marco Island PD on Twitter.