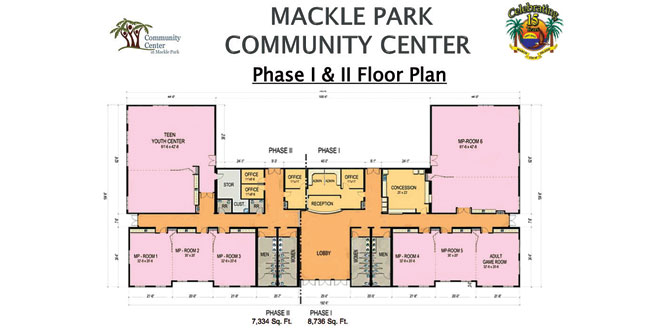 The redevelopment plan for the Mackle Park Community Center is hitting the road. Marco Island’s Parks and Recreation Committee is taking the plan to the community, marketing it to various groups and local organizations. The goal: To rally community support for the current $2.25 million turnkey, modular, precast concrete design concept in preparation for a possible referendum on the issue later this year.

“The committee has taken a stronghold on marketing the need for the new center to the community,” explains Greg West, chairman of the city’s Parks and Rec Committee. “In the past driven, it was driven by (city staff), and I think that a lot of people were fatigued by that. This is going to go to a referendum, and we need to to promote it to the tax payers.”

According to West, the committee’s marketing plan includes a four-pronged approach: Farmer’s Market, community events, civic organizations and business groups. First, committee members are manning the Parks and Rec booth at the Farmer’s Market every Wednesday to answer questions and talk to residents about the plan for Mackle Park. They are also taking the plan to community events, and making presentations to Marco Island’s various civic and business groups.

The philosophy behind the effort is a simple one, notes West, “If (the information) is coming from citizens who do not have a dog in the fight, people are more receptive.”

To be sure, the redevelopment plan for the Mackle Park Community Center could use some positive energy. It has been under fire since a Master Plan for improvements to the entire Mackle Park campus was introduced in 2005. Four of the five phases of the plan have been completed to the tune of $2.5 million. The only remaining component is the community center.

Few disagree that something needs to be done with the current 25-year-old community center. The 8,000-square-foot building was built in 1986 by Collier County. It is horribly out of compliance with the building code and ADA regulations, out of compliance with current flood codes and everything — front door, the electrical systems, air conditioning, leaky roof — needs major work. Renovating the center has been estimated at $500,000, and city officials agree that a renovation would not fix all of the problems.

When the initial concept of redeveloping the community center surfaced, the proposal included a two-story, 40,000-square-foot building that included classrooms, a teaching kitchen and an indoor track and gymnasium. Dubbed by many as “The Taj Mahal,” this plan carried a hefty price tag of $6 million and a creative financing plan that incorporated a public-private partnership with a 12-year lease-purchase agreement at $600,000 annually. The bill would be paid through property taxes.

Many in the community balked at this idea, so it was back to the drawing board for the city. Last year, city staff made some headway after City Council tasked former Community Affairs Director Bryan Milk with exploring the costs of two alternative construction methods for the community center. The first revision was for $4.8 million and then the current plan from Jupiter, FL-based Royal Concrete Concepts LLC at $2.25 million.

Royal Concrete specializes in designing, manufacturing and constructing precast wall, floor and roof systems and concrete modular building units, which are capable of withstanding a Category 5 hurricane and have a 100-year life cycle. Since 1982, Royal Concrete Concepts has been involved in more than 25,000 projects.

In April, representatives from Royal Concrete visited the Mackle Park Community Center and then spent more than a month working with city staff to devise new design and construction plans for a one-story, 16,070-square-foot building that will be built in two phases and adjacent to the park’s existing amenities.

Phase one consists of an 8,736-square-foot building, which will include a central lobby, reception and staff area; restrooms; two programs rooms; adult game room; and a 2,900-square-foot community room. It has been designed contiguous to the existing community center, and building permits already have been secured for phase one. Phase two includes razing the existing community center and the construction of a 7,334-square-foot building with an identical floor plan to phase one. One room in phase two will be dedicated to the Teen Center.

Planning for a Referendum

As the price has declined, it appears community support has increased, even from those who were staunchly against redevelopment in the beginning. Questions remain, though. Namely, how will the city fund the project — a question with which City Council continues to wrestle. Also, what about the community referendum on the subject, which was a campaign promise made by many current city councilors during the 2012 campaign.

Enter the Parks and Rec Committee and its marketing plan. The first stop was the January meeting of the Marco Island Property Owners, and committee member Dr. Jerry Swiacki presented the proposal for the redevelopment of the community center to MIPO’s members.

Swiacki began his presentation by stating the community center’s mission statement: “To improve the quality of community and family life by creating and maintaining an intergenerational, multicultural, full-service community center that provides social, health, recreational, cultural and educational opportunities for all.”

“There is a big misconception that the community center is just used by kids,” Swiacki said. “It is the most cost-effective deal in town for groups to meet — best deal in town.”

Still, Swiacki noted, “12,000 participants have been turned away because of a lack of program space” in the current community center. “The price is right, and the time is right,” he added. “(The committee) is here to give information and implore you to think positively and to vote ‘yes’ to a referendum.”

When Swiacki finished, the funding question reared its head. How will the project be funded, and how much will it cost to maintain? “Show me where the money is coming from,” said Kathy Keeling. “Who is paying for it? How is it being paid for? We want our island to stand out and want it to look good, but first I want to know who is going to pay for it and how. What is the budget?”

Tim Klune offered a possible option. “Have we explored the opportunity to get some more of our tax dollars back from the county?” he asked. “What does the county give to fund various local projects? What funds come back to the city from the county?”

In the end, it appeared Swiacki left the audience with a lot to consider. “We have to keep an open mind because a lot of things have changed,” MIPO Chairman Ray Seward told the membership at the beginning of the meeting. At the conclusion, he said, “It is a whole new thought process.”