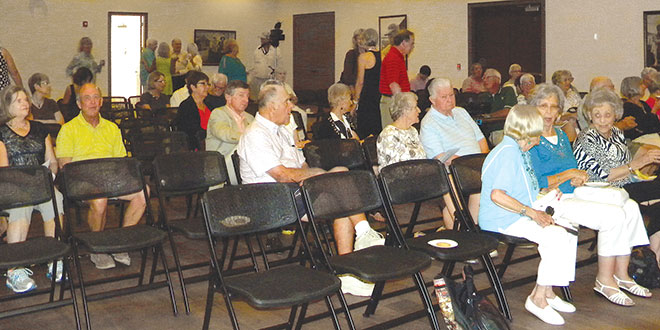 The Rose History Auditorium saw almost every seat taken, the audience entertained for more than an hour by Joyce’s colorful storytelling. PHOTOS BY MELINDA GRAY

“People love to hear about history. I’m telling them the history of Marco; how we did it, how we brought it to the marketplace,” said Joyce.

Joyce was born and raised in Boston, where he was a food broker with his father. He attended Boston College night classes briefly, before shipping off to Korea and then Japan, but was wounded and sent home in 1961. He re-enrolled in classes, eventually earning his master’s degree in Marketing.

While at Boston College, he was approached by a classmate with an interesting opportunity: an open position as the sales director for a Marco Island real estate office in Boston. The office was owned by the Deltona Corp., headed by the Mackle brothers.

“I had never sold a piece of real estate, never been in the state of Florida, but I went and I applied for it. Believe it or not, they hired me,” said Joyce. “It was two eccentric Jewish principals, an ex-milk bottle salesman and myself; we were the company. We went on to become the largest in the world.”

He taught himself the business, gathered leads, called people, did research and got himself going in the right direction. He first came to Marco Island in 1963 and joined in the successful marketing and off-site sales of nine Mackle-built communities throughout Florida, including Marco. Joyce said it was then he had the good fortune of meeting Frank Mackle, his dear friend and mentor, who he affectionately refers to as Mr. Frank.

“We built a phenomenal relationship that lasted throughout the years; he was always accessible to me with my crazy ideas. I was kind of a renegade in this business; I thought outside of the box,” said Joyce.

He believes that Mackle and Deltona were different from other developers, most of which were only interested in selling land. It was born on the drawing board with three governing principles to set it aside: limiting a community’s size, controlling growth and having central water.

“Other communities have a 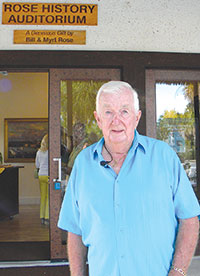 Jack Joyce was several times awarded Deltona’s ‘Agency of the Year’ and is three-time Deltona ‘General Manager of the Year.’

beginning, and often a middle, but never an end,” said Joyce. “In those days, Florida real estate was like the Wild West. Anything and everything went. There were very few laws or restriction on developers. Mr. Frank would never let us forget we were home builders; we built cities. Selling the land was only part of the whole.”

In 1963, the access points into Southwest Florida were very limited. Joyce and his initial group of potential buyers arrived in the first jet to land in Fort Myers. A bus ride along a shell-based road brought them to the beach on which the Marriott now stands.

Over the course of the trip, more than $1 million in Marco Island property was sold. It was evident to Joyce that the usual principles and practices wouldn’t hold true for this island — a place for people who appreciated the value of water-front real estate and could dream of having a boat at their back door someday.

Getting people to visit proved to be only the beginning. Memorabilia was needed to create a fun atmosphere and distinguish Marco Island for visitors. They opened a supper club; created “Margo the Mermaid” to pose with people; and took visitors down the Marco River on their Kontiki boat to see the island. Lavish parties held in Boston stirred interest in and promoted Marco Island.

“The character of marketing Marco Island has changed dramatically; we’ve elevated it to a new level,” said Joyce. “It has to be one of the finest real estate developments in the country, if not the world.”

Ultimately, high demand led to the release of Big Key, Little Key and Blue Hill Bay onto the market, and the 4,900 properties were snatched up almost overnight. An environmental uproar ended in a landmark decision against Mackle; they could not develop the three mangrove islands.

The decision was good for Marco Island, limiting its size, but spelled the end of the Deltona’s endeavors here. They kept their promise to refund every bit of the $130 million invested. Joyce sold his stock and came to Marco Beach Realty. He continued to sell beach-front property in Marco Island, and is still in the real estate business, largely consulting and public speaking.