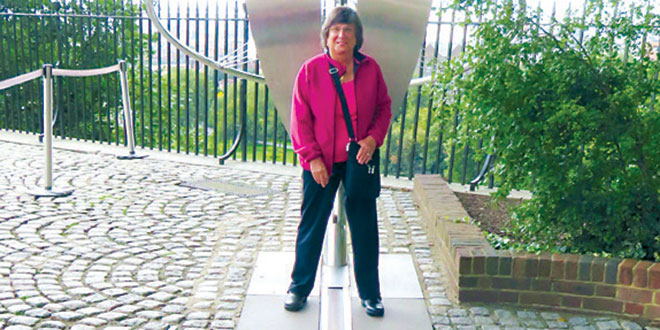 Tippy with one foot in the Western Hemisphere and the other in the Eastern. SUBMITTED PHOTOS

Patricia “Tippy” Cavanagh is a Past Commander of the Marco Island Sail and Power Squadron. She has been a member for fifteen years, and now teaches some of the most challenging navigation courses, including celestial navigation. Tippy and her husband, John, toured England, Scotland and Wales this past summer. They visited one location that had very special meaning for this mariner and teacher.

While in London, Tippy and John traveled by boat on the River Thames to see the Royal Observatory in Greenwich, the location of the Prime Meridian of the world, known to mariners as longitude 000 degrees, 00 minutes, and 00 seconds, and also the starting basis for standard time zones. The Prime Meridian sits high on a hill in Greenwich Park overlooking the river, and is marked on the pavement in the courtyard. Visitors can actually straddle the line, and have one foot in the Western Hemisphere and the other in the Eastern.

The Royal Observatory also houses the Airy Transit Telescope, mounted in 1851, and designed to move only in the plane of the Prime Meridian, thereby measuring precise coordinates. 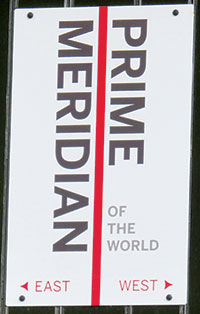 The last observation using this transit telescope was published in 1954. In addition, in the buildings at the Royal Observatory there is a museum of astronomical and navigational tools, including John Harrison’s marine chronometer (1714), which allowed sailors to establish longitude at sea and, thereby, permitted safer, long-distance voyages.

Tippy, John, and their son and daughter are true water aficionados, not only enjoying great times on their boat in and around Marco Island, but also in the pristine waters of much of the Caribbean. As a family they have dove in Belize, much of the Bahamas, Dominique, Saba Island, and the Solomon Islands in the Pacific.

Tippy says she enjoys the camaraderie of her colleagues at the Marco Island Sail and Power Squadron, and, moreover, that her navigational teaching responsibilities are intellectually challenging and help her mind to stay active and alert. She invites anyone with an interest in boating, whether he or she owns a boat or not, to consider taking some of the many courses offered by the Squadron, starting with America’s Boating Course, next offered starting November 2, 2015. More information on this and other activities is available by calling 239-213-8722.