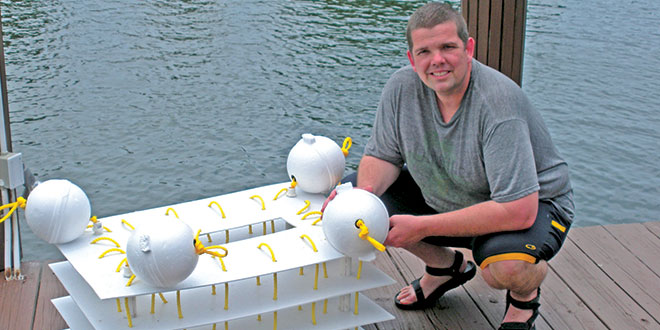 David Wolff, Ocean Habitats, and one of the standard-sized artificial dock habitats he invented. Photo by Don Manley

A pilot project designed to revitalize the cloudy waters of Marco Island’s canals to restore their function as sustainable marine habitats teaming with a diverse array of fish, shellfish and other aquatic life, has caught on with residents.

At the request of their owners, six of the artificial dock habitats were installed in March behind six homes that abut a canal that runs between Elm and Perrine Courts. Since then, 19 more have been deployed, all of them purchased by the city for the pilot project at a cost of $10,000, which includes installation, as well as monitoring to determine how they are performing. Another six habitats were purchased by residents for the canals behind their homes.

The simply constructed devices are designed to mimic mangrove roots in creating a home for organisms, such as larval and juvenile fish, crabs, shrimp and lobster, which consume the phytoplankton – microscopic marine plants – that can discolor water.

Cleaner water can also allow for the growth of the sea grasses that provide important aquatic habitat.

Designed and manufactured by Fort Myers-based Ocean Habitats, LLC, the lightweight habitats are made from fiberglass, PVC pipe, polypropylene rope and crab-trap floats. They come in two sizes, standard and the smaller “sampler,” that are installed under canal docks. According to Ocean Habitats, each habitat is able to support 60 different marine species and when fully developed over 18 months, they can clean 35,000 gallons of seawater every day.

The habitats are intended to aid the aquatic life cycle that was impeded by development, pollution and the installation of concrete seawalls and docks.

Ocean Habitats founder, president and executive director, David Wolff, said the habitats have piqued the curiosity of a fair number of residents.

“We’ve had an awesome start to this program the city has put together for these to be in the water,” he said recently, while installing the final device. “We’ve had people stopping by in the car, people stopping by while walking, people coming by in their boat saying, ‘Hey, what are those, how do they work, what’s the website, I want to look into this.’”

Wolff said he’s also received a number of requests to give presentations on his invention before groups and organizations when the tourist season resumes.

“There are a lot of people in the boating community who would love to see more fish, they’d love to see cleaner water,” he added. “I think it shows that as an island, the people here, they love how gorgeous this place is and they would love to make it better, and that’s what we’re here trying to do.”

It was Jim Timmerman, chairman of the city’s Waterways Advisory Committee, who first brought the artificial habitats to the city’s attention. He tested the products at his home for about 18 months before introducing them to the committee. After investigating the devices, the Waterways Committee voted to recommend city council approve the pilot project.

Timmerman has two standard-size habitats and one sampler, which is about one quarter the size, installed behind his home. He has described the results as being “absolutely phenomenal,” noting that catfish and sheepshead were the only fish his son, Noah, 8, used to catch from their dock. Now, red snappers, snook and other fish and crustaceans are present, he added.

Marco is serving as the first large-scale deployment of the habitats. Demonstrating their effectiveness when deployed on a widespread basis will be essential to marketing the product, said Wolff.

“Marco Island is giving us the chance to do that, which we’re really excited about,” he added.

Wolff cautioned that a dramatic turnaround in the aquatic diversity of Marco’s canals will take time and effort. He said the installation of additional artificial habitats, combined with action the city is taking to improve water quality, such as curbing fertilizer use and covering storm drains, should produce that result.

“If this keeps gaining momentum in the city, there’s no reason these canals can’t be full of life, not just catfish and sheepshead, but all of our indigenous fish,” said Wolff. “I’m excited by that. It’s going to take a few years. But I think we’re off to a really good start with what we did this week and we’re just going to keep building on that.”

For more information about Ocean Habitats, LLC, and its artificial dock habitats, email Wolff at reefdoctor1@gmail.com or call 786-520-6459.