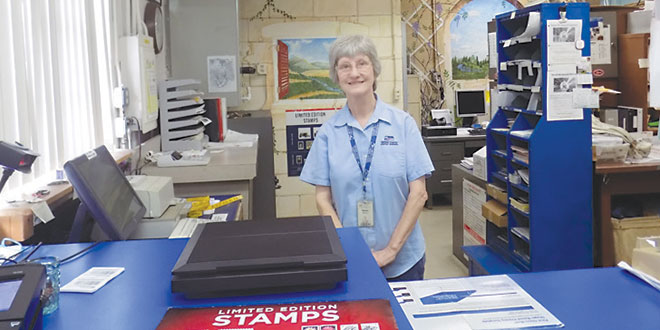 Marie Thompson as customers saw her. PHOTO BY BARRY GWINN

After 15 years with the postal service, Marie is exchanging her postage machine for a pickup truck and camper. She and her husband Mike plan on doing some traveling around North America. “Mike and I have always wanted to travel,” said Marie, “Our health is still good and we felt that now was the time.”

Marie has been a clerk at Everglades City, Ochopee, and Chokoloskee. She was transferred to the Goodland Post Office three years ago, taking the place of Judith Pritchard, Goodland’s last officially designated postmaster. Although Marie didn’t get the title (the title of postmaster has been replaced by “postal clerk” in the above offices), she ran the Goodland Post Office like a pro. I don’t know anyone who didn’t appreciate and like her.

“This was a hard decision for me. I was happy in the Goodland Post Office and loved the people of Goodland,” Marie told me, “After months of stewing about this, we finally decided to follow our dream.”

Marie has lived in SW Florida all her life. She tells me that her great grandfather was Samuel Weeks, founder of a pioneering fishing and farming family. Marie claims that Weeks was the first documented white settler in these parts, and that he farmed and fished throughout the islands. She says that her husband Mike is descended from George Storter, who built the house in Everglades City that became the Rod and Gun Club.

I will especially miss Marie. The Goodland Civic Association does mass mailings at the post office. Marie took the stress out of it. I wish her the best.