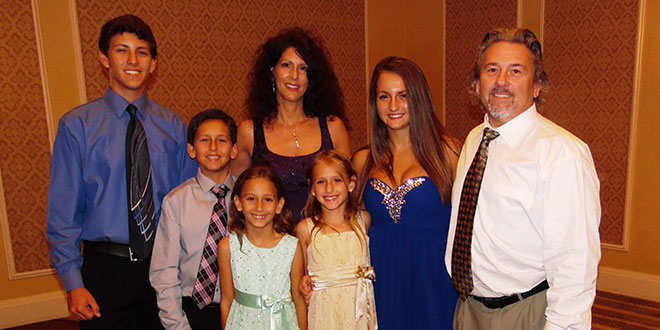 Wheeler will attend the United States Air Force Academy. Ragan is undecided, although Stetson University in Deland is a possibility.

Starring in the classroom, cross country and track at Lely High School, Wheeler posted a 5.1 weighted GPA for his four years, while winning major races in his two sports. Being held back in second grade at Tommie Barfield became a turning point, even at such a young age, for Wheeler.

“It gave me a year to mature, and I knew even 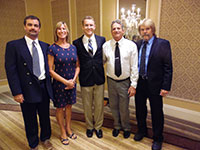 Gage Wheeler, with his parents, Sandy and Duncan, and Lely coaches Chris Black, left and Mark McGarity, right, at the 26th Annual Winged Foot Award dinner. Wheeler invited the coaches to the dinner as two of the people that made a difference to him at Lely.

then that it was important to do well. Good came out of it. By fifth grade I was getting straight A’s,” he said.

His parents suggested having fun in sports, not looking at them as a way to advance to college. While good in football, basketball and baseball, they didn’t become his focal point. By his junior year, he was an avid runner in cross country and track.

“I started out running to keep in shape for other sports,” he said. “As I learned more about running, I enjoyed the training, and it snowballed into a passion.”

His coach for both sports, Mark McGarity, said, “Gage was an athlete that became a runner. He is one of the most dedicated, hardest working young men I ever coached, and an outstanding young person.”

It certainly paid off. In his senior year, Wheeler won the district cross country championship. He 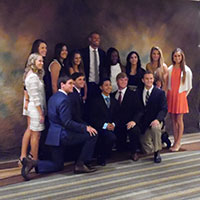 The 13 nominees had their photo taken with Shane Battier, former NBA player and now TV analyst, who was the speaker. Lely High nominee, Gage Wheeler, is on the right of the first row and Marco Island Academy’s representative, Jessica Ragan, is fourth in the back row. Michael Walker of Naples High, first on the left in the first row, won the honor.

followed that up in the spring, winning the district 1600 and 3200 meter races. As a a member of the 4×800 district championship team, Wheeler helped set the 4×800 team school record.

With academics and sports, Wheeler said, “I needed to prioritize. There have been a lot of sacrifices, being dedicated is not easy.”

Wheeler reports to the Air Force Academy on June 25. “It is the next chapter of my life,” he said. “I think what I have done will help me be prepared.”

Jessica Ragan received eight sports letters, four in volleyball and four in basketball. She also excelled in the classroom, with a grade point average of 4.5. Ragan made the choice to stay at home for high school, choosing the new Marco Island Academy over Lely High School.

“I knew I would make new friends, and wanted to give the new school a chance,” 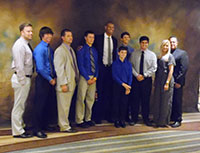 she said. “After the first year I was excited to come back, I had no doubts.”

Ragan enjoyed the closeness a small school can bring. “Everyone is closer, there is more individual attention; it feels like family.”

She led the volleyball and basketball teams to second place finishes in the district, and two playoff appearances in both sports.

Ragan said that volleyball coach Kelly Monnot was very influential. “She understands dedication, how to be passionate about something and how that is a good thing to be,” Ragan said. Her most memorable moment was when they beat a larger school, Palmetto Ridge, for their first volleyball win. “We also played well against a very good Lely team as our program grew and developed,” she said.

Ragan wants to get a degree in elementary education. “I love being around younger kids,” she said. “I want to be a part of their growth and development.”