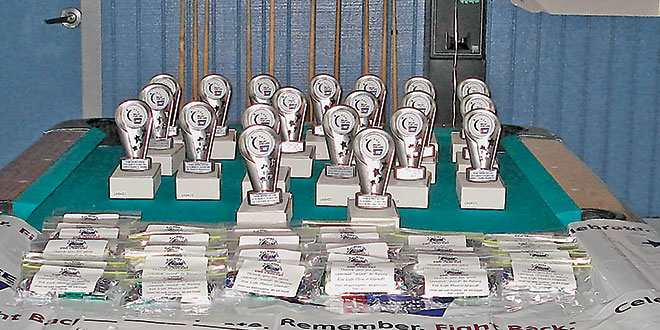 Trophies for the Teams of Excellence.

The Relay For Life is known as a one-day community event, but there is so much more to this powerful force in the quest for a cure. The Relay For Life is actually a fundraising season, beginning each year in October and reaching its annual finish line in August. It is a team event, where individuals and groups work diligently throughout the year to raise money for the cause. According to Sue Olszak, community manager, Relay For Life of Marco Island, this year’s event was fueled by the energy and dedication of 171 registered individuals and 25 registered teams.

“Celebrate” was the key word at a recent festive gathering at the Sand Bar, as the 2016 Relay For Life of Marco Island released its final fundraising figures. Part of the celebration included a guessing game of what 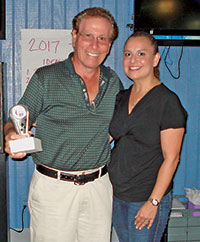 Photos By Maureen ChodabaTeam City of Hope’s Roger and Jessica Hernstadt give thanks to team captain Samantha Malloy.

that final fundraising figure would actually be. Everyone present seemed to realize that the projected goal of $250,000 had been surpassed, but the crowd waited with palpable suspense as 2016 RFL Event Lead Cathy Nelson revealed the secret number of $308,480.07! The crowd was thrilled with this record-breaking amount in the fight against cancer. 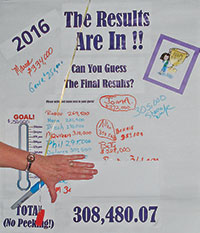 The final number is revealed!

Cathy Nelson is looking forward to continuing as the Event Lead for the 2017 Relay For Life. She said, “I am honored to have been the event lead for the 2016 Relay For Life of Marco Island. The Relay Committee planned a fantastic event. I would like to thank each and every Relay team who worked so hard to raise a monumental amount for such an important cause. We have exciting changes coming to the 2017 Relay For Life and hope the entire community will come out and join us in the fight against cancer. Watch for details of our kickoff in late fall.”

Just as one Relay For Life fundraising season comes to an end, another will begin again soon. With the commencement of a new season, the mission continues to celebrate survivors, remember loved ones lost, and fight back against this horrible disease. Mark your calendars for April 1, 2017, the date of next year’s event! Coastal Breeze News will keep you informed.

For more information, please visit www.relay.acsevents.org or call the Marco Island office of the American Cancer Society at 239-642-8800.