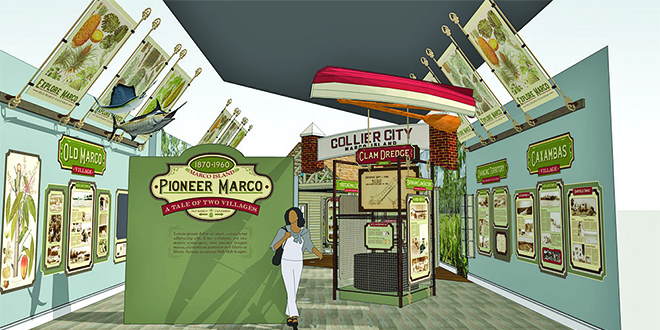 According to Museum Curator of Collections Austin Bell, “The museum is going high-tech to engage visitors in a decidedly low-tech period in Marco Island’s history. Pioneer Marco bridges the gap between the Museum’s Paradise Found (Calusa) and Modern Marco exhibits, marking an important milestone for the museum.”

The Pioneer Era allows visitors to time travel to the early 1900s when Marco Island could only be reached by boat, and the island had no roads, bridges, ferries, electricity or infrastructure of any kind. It was under these challenging conditions that Marco’s early pioneers, including James and Tommie Barfield, the Olds family, Colliers, Burnhams, Doxsees and others made Marco Island their home.

The interactive exhibition chronicles the evolution of the pioneer villages at Marco and Caxambas, and offers visitors an in-depth look at the people, industries, and lifestyles on Marco Island during the late 1800s and early 1900s. Rare photographs and objects are brought to life in dynamic and engaging displays.

The most prominent feature is an immersive Florida “cracker cabin” where visitors can sit and view films about Marco history. Other exciting elements include digital projections, original animations and artwork, a replica Collier City archway, and digital displays

for viewing materials from the MIHS collections.

Visitors also can take a rare peek into life on Marco Island during the early 1900s through the eyes of a 14-year-old girl. One of the three daughters of early Marco settlers, Drs. Mary and Louis Olds, Saloma Olds, began writing a diary in 1913 and chronicled life with her family in great and charming detail.

“The completion of the Pioneer Marco gallery represents a major benchmark in the Marco Island Historical Society’s mission to preserve and present Marco Island’s unique history for residents, visitors and posterity,” notes MIHS Executive Director Patricia Rutledge. “Pioneer Marco is the Museum’s third permanent gallery and exhibition to be completed in just three years. Its completion is another important step in achieving our vision for the Marco Island Historical Museum to be known as a world-class museum,” she adds.

The Marco Island Historical Museum is located at 180 S. Heathwood Drive. The Museum is open Tuesday through Saturday, 9 AM – 4 PM. Admission is free and the site is handicapped accessible. For general information visit www.colliermuseums.com or call 239-642-1440.