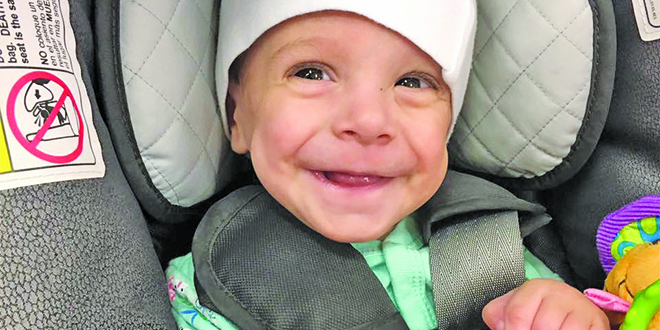 With his deep brown eyes and infectious smile, no one who meets 7½-month-old baby Cash is immune from his charms. But what many don’t know is that this beautiful child is nothing short of a miracle. Cash Carter Macchiarolo was born on August 24, 2016, five weeks early with a severe heart condition.

Cash’s father Nick Macchiarolo, 26, works for the Marco Island Fire Department as a firefighter/EMT; Mother Gabriella, 27, has a hair and makeup studio and her own custom makeup line, Lovely Bones Cosmetics.

Nick and Gabriella were married in 2015. The fun, young couple chose Halloween, their favorite holiday, for their wedding day. The newlyweds were thrilled when they found out Gabriella was pregnant. The baby’s expected due date was September 29, 2016. But as it often happens in life, things did not go exactly as planned.

On August 24 Gabriella went to her doctor a day early for a routine 35-week prenatal check up. She felt that “something wasn’t right.” She couldn’t walk because her feet and legs were painfully swollen.

At the doctor’s office she learned that she had gained 16 pounds in two weeks, from what turned out to be water retention, mainly in her feet. When the nurse checked Gabriella’s blood pressure she was urged to go immediately to the women’s center triage for testing. Gabriella did not realize the severity of the situation. “I just thought that they were being extra cautious, so I just shot over there, not thinking anything of it,” she says.

After spending three hours in triage doing blood work, an EKG, and other testing, Gabriella was asked, “Are you ready?” and told,  “You’re going to have this baby today!”

Shocked, but trying to process it all, Gabriella asked, “Um. Can I call my husband first?” Nick left the fire station and raced to the birthing center.

Nineteen hours later, Gabriella was prepped for a C-section, and Cash was born.

But after the C-section the Macchiarolos didn’t get to see Cash. The doctor told them that the newborn had to be immediately flown to the children’s hospital in Miami. Nick flew with Cash in the helicopter, and Gabriella drove after checking out of the hospital the next day. Cash was eventually diagnosed with tetralogy of fallot, a rare condition caused by a combination of four heart defects that are present at birth. Numerous surgeries would be required.

“We had no idea we would be living at the hospital for over four months.” Gabriella says, “We never got to hold Cash in the beginning. We got to stick our meticulously clean hands in the hole of the humidacrib and rub his hand or his foot.” 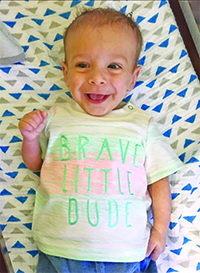 Born five weeks early, Cash didn’t even weigh four pounds. At only three days old Cash had his first open heart surgery, and came out of it with flying colors. Ideally doctors wanted to wait longer for Cash to grow a little bit more, but there was no time to wait; he needed the surgery to live.

Two weeks later, while preparing to go home, Cash was given a routine “discharge echo” on his heart. As the Macchiarolos walked out of his hospital room, car seat in hand, the doctor stopped them, saying, “I need to talk to you guys.” Gabriella says, “Our hearts sank. He told us that Cash has a pseudo-aneurysm on his heart that is bigger than they have ever seen, the picture they showed us was terrifying. Cash’s heart was the size of a walnut and the aneurysm was the size of a golf ball.”

They knew it was likely a poor prognosis. They were told to say their goodbyes; to take their last pictures, hold him for the last time, and get him baptized.

Their families came up for the surgery and to offer their support. Thankfully, the outcome was nothing short of a miracle- Cash pulled through. “I would say that was our little family’s biggest triumph!”

But there were more struggles to come. Cash required additional surgeries, and in between each of them there were lung collapses, blood clots, infections, and withdrawals. Every day was a new struggle for Cash to overcome.

Cash has had two stomach surgeries and a feeding tube that gave him his full nutrition for about a month. About a week after taking him home, his body rejected the foreign object inside his stomach and developed an infection. He was flown to Miami for emergency medical treatment. “There are daily challenges and triumphs for us, every day is a new one,” says Gabriella.

Gabriella has chronicled Cash’s journey on Facebook. She shares stories of his progress, as friends and family cheer him on and offer words of encouragement. Cash is a happy baby, who is thriving. The couple remains positive and upbeat, showing an amazing strength both as a couple, and as parents.

When asked about what the future holds for Cash, says Gabriella, “Our hopes are high and positive! Cash has shown us how strong he is and Nick and I have had nothing but a positive outlook for him.

We know we have a few more surgeries. One big open heart surgery and five to six cath-lab heart surgery procedures. With a baby like Cash, we don’t know what else he will need in the future, so instead of stressing about them, we take them day to day.”