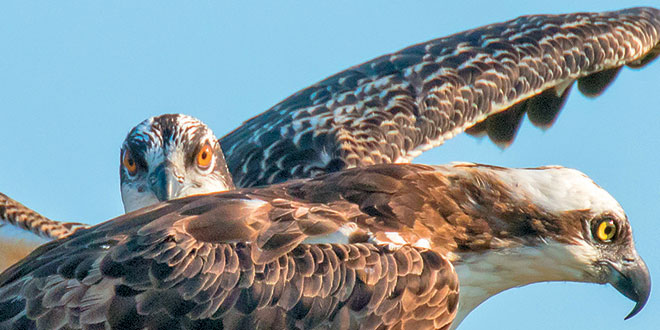 A young osprey peeks from behind mom.

Amid the morning haze, sitting on a battered perch, bright yellow eyes, stare out into the horizon, alert, with a loud piercing shriek, take flight into the early morning light.

Ospreys are common sights and sounds in Marco Island, soaring high over the waterways and sitting erect on their huge stick nest with white heads gleaming in the sun. Something is missing 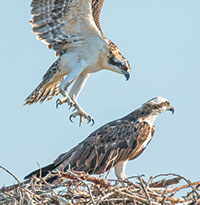 if you don’t hear the osprey’s call during your morning walk, which is more of a high pitched shriek, a cheereek, cheereek, or a yewk, yewk, yewk. The females are bigger than the males. Usually seen as pairs, they tend to return to the same nest each year. They feed exclusively on fish, and the young will take first flight at 7-8 weeks old.