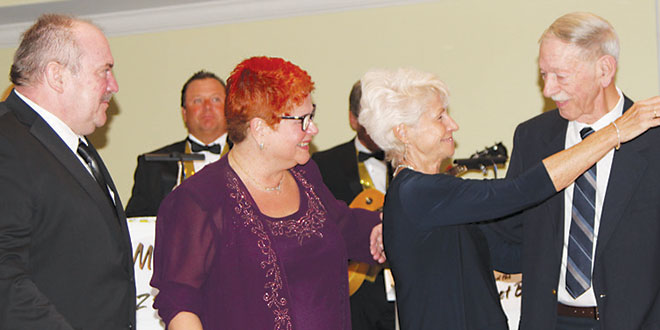 On November 15, the Marco Island Fire Rescue Foundation held it’s first ever Firefighters Ball in honor of the island’s 50th anniversary. Firefighters, first responders, EMTs, retirees and their families were invited to an evening of dancing and fun at the Island Country Club.

Marco Island Fire Rescue Foundation (MIFRF) president Dianna Dohm commenced the evening by welcoming guests, as well as acknowledging the members of the MIFRF who helped make the night possible. She then turned the microphone over to fire station administrative assistant, Mary Husted. Mary, who’s been at the station since 1998, introduced the active duty and retired firefighters in attendance, as well as their significant others. The Harp & Thistle Pipe Band acted as the soundtrack to her introductions—bagpipes and drums filling the air as firefighters proudly walked to the center of the dance floor.

Fire Rescue Chief Mike Murphy then took to the stage, 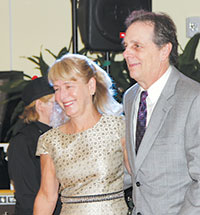 joking about fire exits and safety hazards before transitioning to a more serious topic. He invited two members of the Marco Island community, Chuck Gunter and Olaf Laven, to join him onstage. Gunter and Laven were both technically dead before being saved by members of the Marco Island Fire Rescue department. They represent what the fire station can do and what they’re here for, to save lives. Without the fire department’s intervention, the two men would not have been there that night, making their attendance extra special. The men and their wives shared an emotional dance to Louis Armstrong’s “What a Wonderful World.”

Finally, it was time to eat and the guests were welcomed to the buffet. The Z Street Band started up and Chief Murphy invited everyone, especially the firefighters, to join him on the dance floor, where he stayed for most of the night. 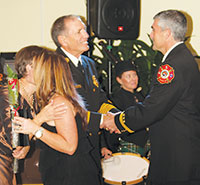 The book commemorates the men and women who worked hard to protect Marco Island over the past 50 years. It gives a brief, yet thorough, chronological history of the department, specific incidents, the island’s fire emergency network system, how it’s grown and where it is now. At 144 pages the book is comprehensive with photos, personal stories, historical and interesting facts.