Marco’s DAR Learns About the Draft 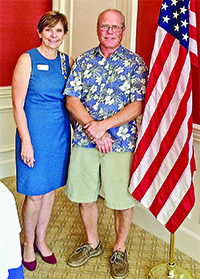 DAR stands for Daughters of the American Revolution, so it’s expected that America’s military history would be very much on the minds of Marco’s DAR chapter. And that was the theme of Michael Eckers’ presentation at the chapter’s January meeting at Hideaway Beach Club.

Michael Eckers is the author of several books on American military history, including the service of many of his ancestors. He explains that his four years in the U.S. Navy at the end of Vietnam prompted him to try to honor those who sacrificed for our freedoms. A decade ago, while working as a postmaster, he spoke about the Civil War to a group of high school students. Eckers says he knew then that sharing his love of American military history was what he wanted to do.

Eckers told the DAR members about the history of the military draft in America. “I wanted to elaborate on the use of mandatory from the Civil War, through the two world wars and Vietnam.”

About today’s military and the ongoing wars in the Middle East, Michael said, “Our country has been and is blessed with citizens who are willing to put their own lives on hold to serve and defend the rights and freedoms of those who choose not to.”

Eckers quoted Confederate General Stonewall Jackson to make his point: “The patriot volunteer, fighting for country and his rights, makes the most reliable soldier on earth.”

And Eckers included the many women who served the military, but who were not in the military, such as Clara Barton, the Civil War nurse who founded the American Red Cross. She said of her calling, “This conflict is one thing I’ve been waiting for. I’m well and strong and young, young enough to go to the front. If I can’t be a soldier, I’ll help soldiers.”

On the importance of a robust military, Eckers quoted General George Washington: “One of the best ways to keep peace is to be prepared for war.” President Ronald Reagan, who advocated “peace through strength,” echoed that principle two hundred years later.

Eckers concluded with this quote from WWII General Douglas MacArthur: “The soldier above all others prays for peace, for it is the soldier who must suffer and bear the deepest wounds and scars of war.” To read Michael Eckers’ writings or to book him as a speaker, visit www.michaeleckers.com.

DAR has 180,000 members in 3,000 chapters worldwide. Members are women 18 years or older, regardless of race, religion or ethnic background, who can prove lineal descent from a patriot in the American Revolution. The DAR supports the active U.S. military and veterans with more than 200,000 hours of volunteer time annually at VA hospitals and other facilities. Members donate care packages, phone cards and needed personal items to America’s service personnel abroad. Members also participate in naturalization ceremonies and recognize outstanding veterans and ROTC/JROTC cadets.

The Marco Island Chapter of the DAR was established in 1976. Monthly luncheon meetings are at 10:30 AM on the third Thursday of each month. Potential members and visitors from other chapters are welcome. For more information, please contact Karen Lombardi at 239-394-0028.