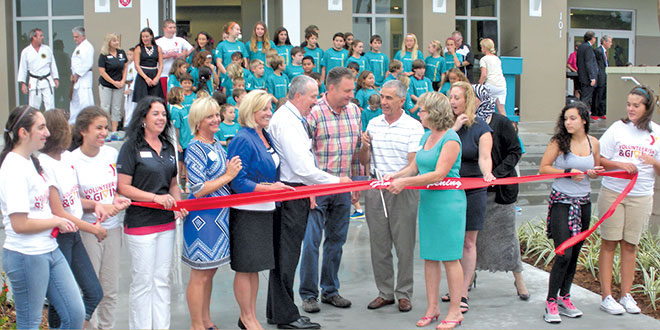 A dream has been realized with the opening of the new youth development center at the Greater Marco Family YMCA.

The $1.2 million, 5,750 square-foot facility was dedicated recently in a brief ribbon-cutting ceremony that included remarks from Marco Y CEO Cindy Love, as well as several board members.

The event also included a color guard from Marco’s American Legion Post 404, music by the Marco Island Charter Middle School Jazz Band, and the presence of a host of community members and officials from city government and the fire-rescue

Youngsters eagerly tried out some of the youth development center’s exercise equipment during the tour of the new facility that followed the dedication ceremony.

department, as well civic organizations and the business community.

“This building is the physical representation of a promise kept,” said Ashley Lupo, a Marco Y board member chairman and chairman of its Strategic Planning Committee.

Located adjacent to the aquatics center, the youth development center features two large multi-purpose rooms, a computer lab, a sick bay and age-appropriate exercise equipment, which can also be used by the Y’s preschool’s fitness program.

This is the first time youth programs have their own dedicated space at the Y’s Sandhill Street campus. Fundraising for the project began in April.

“What we all thought was impossible is now a reality,” said Allyson Richards, president of the Marco YMCA’s board of directors.