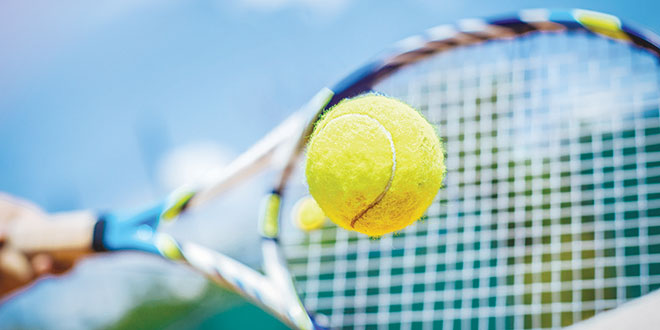 Tennis players know only too well how therapeutic the game is, but Marco’s Y has introduced a new twist to the popular sport.

They’ve turned it into direct therapy to complement exercise programs for older folk dealing with cancer, diabetes or Parkinson’s disease.

It’s a cross-training initiative that adds the tennis to existing fitness programs, pairing with Rock Steady Boxing for the Parkinson’s patients, and also to gym workouts for the cancer survivors or fighters, and people coping with diabetes.

The cross-training sessions cater for cancer fighters/survivors on Mondays, those with diabetes on Wednesdays, and a Parkinson’s group on Thursdays. Sessions begin 11:30 AM, and last about an hour.

“It’s been amazing,” the Y’s tennis director Roberto Saad said of the tennis component. “You see people who can hardly walk doing it. It’s all about coordination, balancing, pivoting and timing … a lot of intricate parts.”

Saad said another plus is that tennis, of course, has a visual 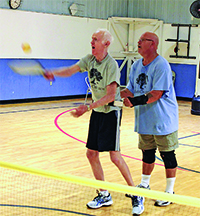 aspect as opposed to, say, lifting weights or riding exercise bikes. “The visual aspect engages the brain to analyze and connect. It’s calculating bounce, speed and spin, and lining up with the ball.”

A former Argentinian pro player, Saad stands on the other side of the net and serves the ball underhand to participants with encouraging advice. “Forehand, backhand, come to the net, volley,” he said as he coaxed participants to improve on each successive outing.

The notion of adding tennis to these particular programs – catering more or less for the 65 to 80 age group – arose from a blue-sky brainstorm between Y CEO Cindy Love, Saad and Healthy Living Director and physiologist Deborah Passero.

Saad and Passero did the refining. “It’s unique,” she says. “We (previously) had people hitting balls against the wall for eye/hand coordination, but he (Saad) had the idea of bringing everything inside with a smaller net and softer balls.”

Passero recalled the story of a Parkinson’s patient who could no longer participate in regular games of tennis. He was 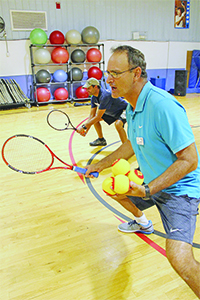 basically excluded because of his diminishing ability. Instead, he took to the indoor drills, and his confidence immediately improved, she said. “When his wife saw how he was improving,” she was in tears,” Passero said. “She said ‘he’s lost that in life, but now you’re bringing him back.’

“You don’t know what you can do until you try,” Passero added, urging people sitting at home with problems to come along over to the Y to find out for themselves. Saad agreed. “These people are so inspirational,” he says. “There are people sitting at home who need to be here.” Passero added, “And, you get a personal trainer (herself), a tennis pro (Saad) and a Rock Steady Boxing coach.”

Equally important is the social aspect. “It’s also about fun and friendship as well as exercise,” she said. “You can draw on the spirit of others when you are at your most challenged state.”

For more information on these particular programs, as well as the variety of other Y activities and programs for youth and adults, visit greatermarcoy.org or call 239-394-3144.