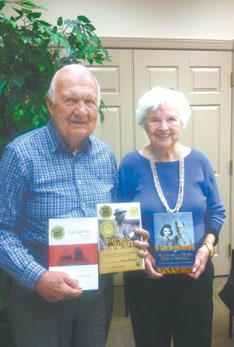 Talent abounds in Collier County. On Wednesday, January 11th, the Marco Writer’s Group had the privilege of meeting Leon Hesser and his beautiful wife, Florence. The couple, married since 1946, are local residents of Naples, born in the farm country of Indiana and self-proclaimed vagabonds. They’ve led a most interesting life all over the world. Hesser has published four books and written and co-published them all after turning seventy five years of age.

Hesser’s non-fiction books follow the old adage, “write what you know”. His first, Taming of the Wilderness, is the history of his family in 19th century America and their co-existence with the American Indians. His second book was Nurture the Heart and Feed the World. The back cover states, “The book is part storybook romance, part how-to manual and part good old American initiative and can-do success story, all told with the very real, dramatic and touching life story of the Hessers.”

In 2006, Hesser published The Man Who Fed The World, the biography of his close friend and colleague, Nobel Peace Prize Laureate, Norman Borlaug. Borlaug has been noted as having developed a high-yielding wheat that took three countries, Mexico, India and Pakistan from the edge of starvation to self-sufficient production of food within a few short years. That wasn’t the end, as Borlaug extended his hand into Africa to “feed the world”. Hesser’s first-hand account of this amazing journey will inspire and delight you. In 2008, Hesser documented his personal trials in the Army in World War II; and book number four, Zig Zag Pass: Love and War, was born. He answered Uncle Sam’s call at eighteen, shared barracks with Hugh Heffner, and fought the Japanese in the Pacific. Hesser’s most recent work is co-published with Helen Bartz of Naples. It is named The Exceptionally Gifted Child, and explores the mind and emotions of extremely gifted children.

The Hessers pursued their higher education later in life. Leon earned his Ph. D. in Agriculture Economics at Purdue, while Florence earned her Ph.D. in education. Florence educated a variety of high profile students including a president and princess, and accepted the job of setting up a reading center in Saudi Arabia and Pakistan. At eighty six, Leon is still working and runs an export business, while Florence owns a publishing company, Bavender Press, in Naples.

The Marco Writer’s Group continues to grow. 24 members and guests attended the meeting. All were inspired by the Hessers, and a few had the opportunity to share pieces of their work with the group. Networking is the essence of the assembly of writers, and each month they come away with a little more knowledge and a lot more confidence to pursue their dreams as writers. A wonderful mix of accomplished authors and fresh new talent all bring something different to the table. The next meeting will be Wednesday, Feb. 8th at the Fifth Third Bank on Elkcam Circle at 5:30 PM The guest speaker will be Ms. Terry Helwig, author of Moonlight on Linoleum: A Daughter’s Memoir. The meeting is open to anyone fascinated with the written word.