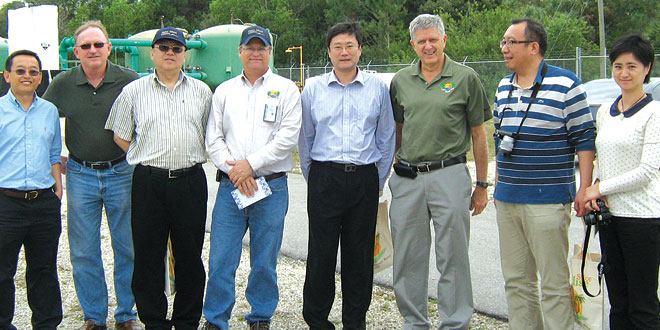 The Marco Island Utility (MIU) Aquifer Storage and Recovery System (ASR) is located about ¼ mile north of Route 41 along Collier Boulevard. The system consists of seven wells that are filled during the rainy season of July to November with storm water runoff in a zone of porous rock 735 to 780 feet below ground. Before entering the wells, the storm water is filtered to remove small particles, disinfected to prevent bacteria growth and to prevent plugging the porous space in the rock where the water is stored.

During the dryer months of February to mid-June water is recovered from the wells and used to produce potable water to meet the demand on Marco Island. The success of the MIU ASR to provide a sustainable source of water for treatment at its North Water Treatment Plant resulted In the MIU ASR System in 2010 being awarded the Grand Prize for the best sustainability project in the United States by the American Academy of Environmental Engineering.

Most ASR Systems in Florida (and the United States) store fully treated potable water in ASR wells when water demand is low and recover the water during high demand times. A few ASR Systems in Florida store reclaimed water (i.e., fully treated wastewater) that is recovered for use as irrigation water. Salts in the native water will increase the salt concentrations to a point where it cannot be used for potable water or even irrigation water. With typical recoveries of 50 to 60 percent the cost of the lost, fully treated, water can make operation of an ASR System very costly.

The MIU ASR System is unique since it stores storm water to create a water source to produce potable water and its recovery exceeds 70 percent. The Southwest Florida Water Management District (SWFMD) has made presentations stating that other utilities could consider developing such ASR Systems in their communities.

Clarence Tears, the former Director of the Big Cypress Basin, a division of the SFWMD, contacted MIU to arrange a visit of the MIU ASR System by four senior environmental managers from the Appraisal Center for Environment & Engineering in the Ministry of Environmental Protection in Beijing, China. During Mr. Tears’s extensive tenure as the Director of Big Cypress Basin, MIU received several grants for expansion of the ASR System from the SFWMD. Mr. Tears is very knowledgeable on ASR Systems and how successful the MIU ASR System is in its ability to store and recover storm water runoff.

The visitors included Kai Qi Chen, Chief Engineer; Yi Su, Director, Division of Metallurgical and Machinery Projects; and Xuegong Liang and Yunhui Du, the Director and Assistant Director of the Division of Integrated Business. Mr. Chen and his staff of Directors are responsible for the approval of environmental permits for every mining and transportation project in China. These visitors have the technical background to assess the benefits of ASR Systems to create water sources within China. Other present for the site visit were Kent Feng, a Lead Hydraulic Modeler with the SFWMD; Jeffrey Poteet, Manager of Water and Sewer Department for MIU; Guillermo Polanco, Director of Finance for the City of Marco Island; and Bruce Weinstein, Senior Project Manager for MIU.