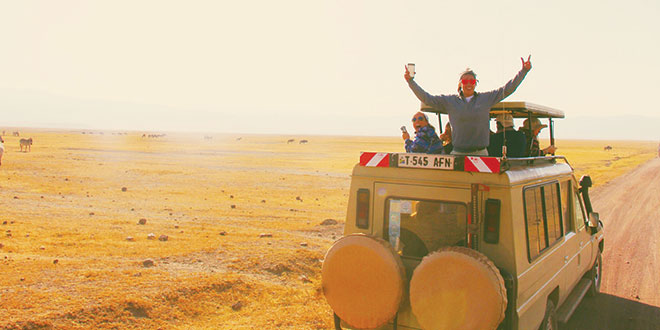 On safari in the Ngorongoro crater; in the background are zebras and wildebeest. PHOTO BY KELSEY HUEBNER

Most teens, and adults for that matter, have a hard time being without their cell phones, internet and other technology- even for a short period of time.

But this summer 17-year-old Ariana Garousi stepped away not only from technology, but virtually every other creature comfort in order to explore the world while serving others.

From June 30 to July 23, Ariana travelled with a group called Rustic Pathways to Tanzania, Africa. A total of 11 teens from all over the world joined her on the trip.

For the first week, the teens climbed Mount Kilimanjaro to its highest peak- Uhuru Peak, which is 5,895 meters high (19,341 feet). The climb posed physical challenges only made worse by below zero temperature. Acclimating to such a high altitude is difficult and unpredictable. During the climb, temperatures fell to an unimaginable low of -15 degrees Fahrenheit. Ariana, an athletic teen who plays basketball, softball and swims, told us that it 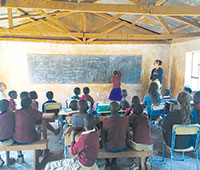 “was the hardest thing I have ever done in my life.”

After the climb, the teens travelled to the village of Mangola Juu for the service portion of their trip.

Ariana encountered the poverty of the people, and the enormous differences from modern life in the U.S. The roads in the village were composed of a rust-colored dirt. It stained everything it came into contact with. Most people in the village ate only one meal a day. Meat was scarce, and hard to afford for most.

Ariana slept in a sleeping bag on the floor, without any modern comforts such as air conditioning, plumbing or electricity. When we asked her why she chose to spend her summer vacation this way, she said that she “wanted to give back.”

The village of Mangola Juu, with a population of almost 4,000, did not have a doctor. In Tanzania, in order to get a doctor, the village must first build the doctor a house. Mangola 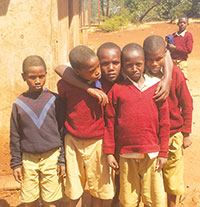 Juu was hoping for two doctors, and so they needed to build two houses. Ariana’s mornings were spent with other teens, building in the heat, to accomplish this task. She and the other teens mixed tons of cement, carried rocks and assisted the local masons.

In the afternoons, Ariana taught English to a Standard 6 class of 11- and 12-year-old students. Some of the students travelled as far as 10 km to get to the school. Although the children experience challenges living in a third world country, they shared so many things with children everywhere. Ariana described waking up in the morning to their singing, playing various games with them, including hangman, and activities such as soccer and Frisbee.

Ariana brought back many lessons which she shared with us. She wisely told me that “people can find happiness in the simplest things.” She also reminded me “that we don’t need all the material things that we think we need.” Her 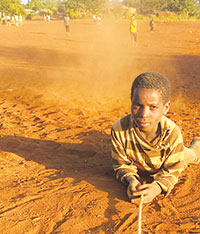 On their second day in the village, the teens partook in a soccer game on the local pitch. This little boy asked Ariana to take his picture.

Ariana has an adventurous spirit. In the summers of her sophomore and junior years, she travelled with Rustic Pathways to Costa Rica and Thailand. Both trips had community service aspects. In Costa Rica, she painted a school, planted trees, cleaned the beach and taught English. In Thailand she worked for elephant conservation, caring for the animals. Her travels are fueled not just by wanderlust, but by her deep rooted desire to help others and make a positive impact on the world.

Back on Marco Island, Ariana has helped her mother with her third grade students, and she has coached at basketball camp.

Ariana started her senior year at the Community School in Naples this fall. She is planning to attend college next year, most likely continuing her education out of state. Not surprisingly, she is thinking about a degree with an international aspect, as well as a career where she can “give back.”