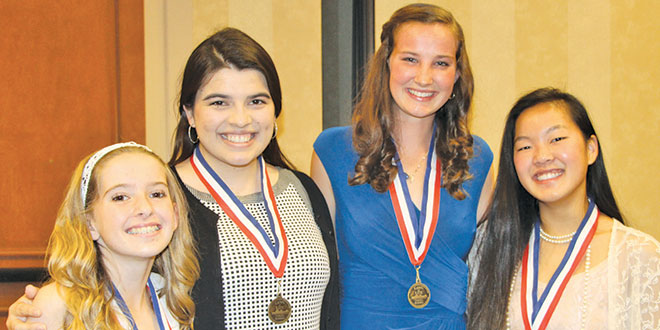 Marco Island students were finalists in every category of the Laws of Life Program, an essay and speech competition for Collier County Schools. Awards were announced at the Naples Hilton on February 24.

Some 4,000 Collier County students took part in the contest, which celebrated its 20th year. The top 40 students then gave their speeches before Southwest Florida YPO49er Fund members.

She said the 49ers is a national organization, made up of members who were at the top of their corporation before turning 49 years old. They provided monetary scholarships to the 40. The total amount awarded was $9,000.

Sophie Torres won $5,000. Her essay and speech was on her father, “Papi.” An El Salvadorian refugee, he came to this country without being able to speak English. He served his new country in the Marines where he became a U.S. citizen. He went on to become an engineer and successful business owner. Sophie is the daughter of Aubier and Erika Torres.

“The 49er’s mission is to recognize character traits, including integrity, honesty and perseverance by those who may become the economic and political leaders of companies in our nation and identify those who have a message,” Hodgson said.

“We are proud of the collaborative effort,” Hodgson said. “We love to see the light of our youth shine in a project like this. Far too often students are thought of as self-absorbed teenagers. This contest is more of the norm of our children.”