Marco spends a night in Jersey 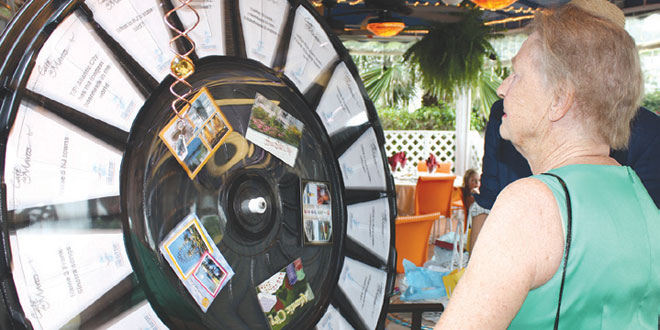 Cafe de Marco celebrated the Garden State in style on the evening of “National Dine Out Day” to benefit ongoing Superstorm Sandy relief efforts in New Jersey. Owner Sandy Franchino organized the event after New Jersey Governor Chris Christie declared January 19 National Dine Out Day; the idea being that restaurant owners would donate all proceeds to the still devastated area.

Reservations came in early and filled up fast as many Marco Islanders once called the Jersey Shore home. Paul and Susan Cantwell, now permanent Marco residents, were originally from Bergen County in New Jersey.

The Cafe de Marco staff got into the Jersey spirit, dressing up and talking in Jersey accents. PHOTOS BY NATALIE STROM

Paul even proudly displayed his Long Island Beach shirt – better known to those in the area as “L.B.I.” The couple stated they found out about Dine Out Day by reading the last edition of the Coastal Breeze which featured an article on Sandy Franchino and her decision to participate in the event.

Frank and Elise Delaney raised their six children in New Jersey, one of which they brought to dinner with them. Their daughter, Erin Rak, recalled growing up, driving to the Jersey shore with the eight-track playing in their wood-paneled station wagon – the memories

Frank and Elise Delaney and their daughter Erin Rak.

still as sweet and fresh in her mind as when she was young.

Diners and restaurant employees bonded over where they were from, playing the “do you know so and so” game to the success of many.

The night was further enjoyed by the offering of a 50/50 raffle, sausage and peppers for all to try and a “wheel of fortune” with all questions geared toward the state of celebration for the evening.

At one dollar per spin, many opted to truly test their knowledge of the state, spending $5 or even $10 to spin for prizes as well

Katharine Gorman and Christine Diaz collect for the 50/50 raffle.

as personal pride. Ron and Margaret Moores lived in Mahwah, New Jersey for 25 years and, according to Ron, “it was the happiest time of our life.” The couple, originally from England, surprised onlookers as they answered five out of five questions correctly. Questions included naming three Frank Sinatra songs, where was the very first baseball game played, what is the state’s motto, what is the state’s nickname and many more.

The staff joined in on the fun, some trying out their best “Joisey” accents, as well as by dressing to impress – Jersey style of course. 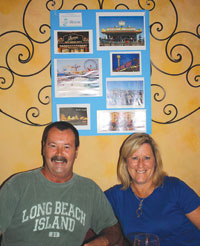 And the food was great too!