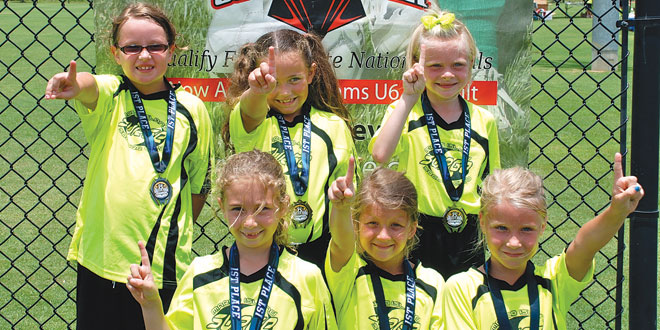 The Marco Island Soccer Club —The Surge — is making waves.

Not only are the teams earning top finishes in 3v3 tournaments all over the state of Florida, but the organization itself is going through a changing of the guard. Longtime organizers Joe Bartos and Al Wagner have passed the proverbial baton to a new board of directors: Chadd Chustz, Patrick Baldwin, Tina Nash and Scott Lowe.

“Joe and Al have built a great organization to support competitive youth soccer on Marco Island, but their boys have grown and moved on to the next level of competition,” explains Chustz, the club’s new president. “They wanted to hand over the reigns to involved parents with younger children that could continue to grow 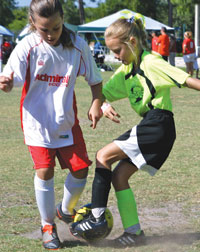 To be sure, the new administration will not rest on the successes of the past, which includes multiple trips to the 3v3 Challenge Nationals held at ESPN Wide World of Sports at Walt Disney World Resort.

The new board comes with fresh ideas and a new growth plan. “We want to continue to grow the 3v3 travel teams by offering an intra-island program in the fall to teach skills and rules of the game, along with a Marco Island 3v3 Tournament. We also would like to start a full-sided competitive program and join the Florida Youth Soccer Association,” Chustz says.

Thus far, the club and its teams have not missed a beat. A majority of the teams have already qualified for this year’s

U6 Boys player Jake Watt (left) takes a shot on goal,while his teammate Mateo Nadlami backs him up.

3v3 Challenge Nationals in August. Earlier this month, three teams competed in the South Florida 3v3 Super Challenge tournament in Miramar, FL, with the U10 Boys placing first, the U13 Girls second and the U6 Boys third out of 10 competing teams.

Most recently, the Surge teams took the field at tournaments in Fort Myers and Ave Maria. While the U7 Girls placed fourth in Fort Myers, the team placed first in the girls division at Ave Maria, as did the U10 Girls. The U8 Boys scored big with a first place medal at Ave Maria, and the U6 Boys finished in second place.

With more tournaments this summer, the club also is focused on fundraising endeavors. On Sunday, June 9th, the club will 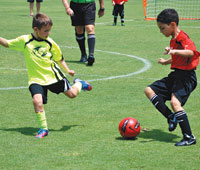 hold the “Surge Color 5K Run” at Mackle Park. Those interested can register now, but registration will continue on race day beginning at 7:45 AM with the race commencing at 9 AM. Adult registration is $25 before June 1 and $30 after that. Children can participate for $15, and kids under five are free.

According to Nash, who is organizing the event, the club already has more than 25 sponsors for the run. “We have had great support from (Marco Island) Parks and Recreation and the business community,” she notes.

There are more events on the horizon as well, says Nash: “We want to another 5K at some point, silent auctions, soccer clinics — things that will get the kids out so they can exercise and have fun.”