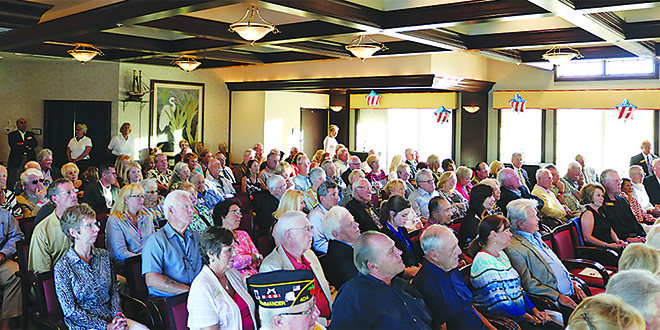 In hockey they call it a “hat trick” when three goals are scored by a single player in one game. Last Friday evening the Caxambas Republican Club scored a “hat trick” of its own when they celebrated the contributions of former Republican Speaker of the House, and part time island resident John Boehner. In addition they also recognized the contributions of their outgoing Caxambas Republican Club President Litha Berger and introduced some of the new Board of Directors for their organization with incoming President David Rice.

The sold-out event was held at the Marco Island Yacht Club with Boehner as the featured speaker for the evening. The personable former Speaker of the House, at one time the third in line for the most powerful job in the world, was right at ease as he and his wife Debbie greeted islanders and engaged in lighthearted conversations with his neighbors.

Probably the most uncomfortable moment came when Boehner realized that his good friend, fellow islander and Ohio native Ed Adams would be introducing him to the assembly that evening. The comedic back and forth set the stage for an enjoyable evening for all in attendance.

Boehner and his wife have been coming to Marco Island for over 40 years. Two years ago they purchased their own home to take advantage of the fishing and golf opportunities, which John Boehner relishes between speaking engagements. His permanent home is still in his native Ohio, which he represented in the U.S. House of Representative from 1991-2015.

Marco is a far cry from his upbringing in Reading, Ohio, where as a child he grew up one of 12 children of a working class family. Boehner has never forgotten his roots and he reflected on that childhood and his pride in making his way on his own, including mopping floors at his father’s bar at the age of 10. He worked several jobs to help put himself through college. At one of those jobs he would meet the love of his life, Debbie, his wife, who he married in 1973.

Boehner turned around a struggling enterprise and turned it into a successful business. He applied some of those same lessons to help him guide his way to the Speakership of the United States House of Representatives several years later.

Boehner is extremely proud of his success in bringing Pope Francis to Washington to address a Joint Session of Congress, the first time ever for any Pope. A devote Catholic himself, Boehner reflected on the emotional roller coaster associated with the visit and how moved he was in the Pope’s down to earth and unpretentious nature.

He is unapologetic in regards to “wearing his emotions of his sleeves.” An emotional Boehner reflected on the Pope’s visit to the Capitol. Taking out a handkerchief, he recalled the Pope standing by him in a private moment and saying, “Speaker, pray for me.”

The former Speaker discussed several topics of the current political landscape. He voiced support for President Trump’s recent military action against Syria for their horrendous chemical attack against innocent civilians. He also reflected on the need for Republicans to come together to deal with the lingering issue of health care reform, sooner rather than later, as it is linked to many other larger issues such as the upcoming budget debate and growing the economy.

Well-known artist Malenda Trick was beaming from ear to ear when Boehner stopped by her patriotic mural and signed the eye-catching presentation that greeted attendees when they registered for the event.

“This was a wonderful event and I’m so pleased that the Speaker took the time to attend with his wife,” said Litha Berger after the meeting. “What a great night. Litha didn’t tell me she was going to set the bar so high,” said David Rice, jokingly.