Marco RE/MAX is a Winner! 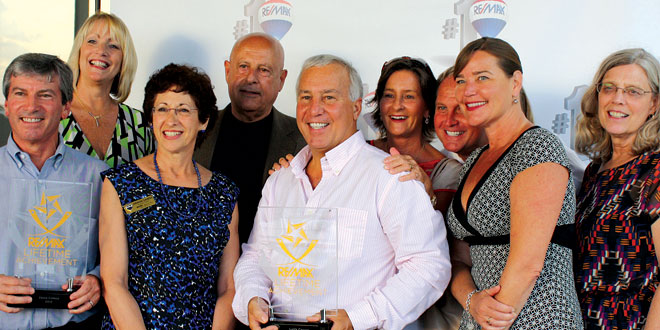 It was a beautiful, inviting evening on the terrace of the Marco Ocean Beach Resort on April 17th. Caribbean music coincided with the beautiful beach scenery during the Annual International RE/MAX Awards Ceremony, held every Spring, honoring realtors for their efforts during the year prior.

The evening brought recognition to some of the top selling realtors on Marco Island as well as honoring some who received country-wide recognition.

The hosts for the evening were RE/MAX Affinity Plus owners, Rocky Farhat and Debra Meredith-Peters, who took over the Marco Island Re/Max franchise in the Fall of 2012. The partners also own RE/MAX franchises in Sarasota, Charlotte and Lee counties. But April 17th was all about Marco Island’s realtors.

“Tonight we’re celebrating all of the accomplishments of the agents on Marco Island,” said Meredith-Peters. “Some of the top producers within the RE/MAX system work here on Marco, so several of our agents will be awarded with RE/MAX International prestigious production awards. These awards come from the corporate office, not from us. We have a number of awards to give out and we are very excited about that.”

Such as Chris Sullivan, who was called to the stage more than once, receiving a Hall of Fame Award for 2011, an 11th Place Award for Individual Commissions earned within Florida in 2012 and a 2012 Lifetime Achievement Award. Larry Caruso and Vince Colase also received 2012 Lifetime Achievement Awards. To win this award, associates must have previously achieved the Hall of Fame award.

Those who received the 2012 Hall of Fame Awards were Susan Boyle, Marianne Oyer and Tammi Vance.

The Sandlin Team received two major awards that evening as well. Alan and Linda Sandlin, along with their real estate team, received 3rd Place for Commissions Earned within the Florida Region for 2012. They were also awarded the Diamond Award; one of the most prestigious awards from RE/MAX International.

Many medallions were given out throughout the evening as well, all with different levels of distinction. With 32 RE/MAX Affinity Plus agents on the roster, it seemed as if every agent was awarded with something.

The evening was a nice respite for the hard working agents who had a chance to mingle, have a cocktail or two and enjoy a fine buffet-style meal prepared by the Marco Ocean Beach Resort. Burnt Store Title and Escrow provided goodie bags for those in attendance.

RE/MAX Affinity Plus is located at 551 S. Collier Blvd #200, just above Stonewall’s Restaurant and may be reached at 239-963-6268. The company is currently working on refurbishing a second location at Marco Walk where the old Konrad’s was located.