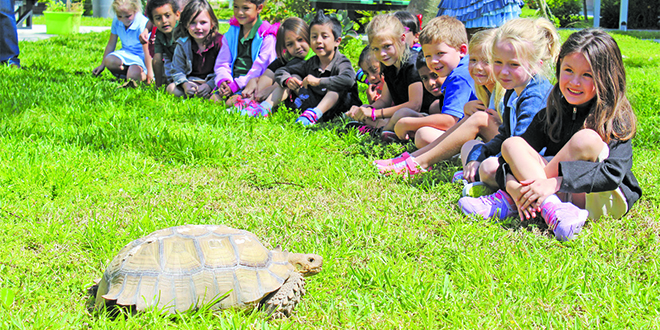 Photo by Samantha Husted | After presentations, students were taken outside to observe a tortoise in action.

The gopher tortoise (or the gopherus polyphemus for all you science folk) is one of world’s oldest living species. The reptile is estimated to have roamed the earth anywhere from 500,000 to two million years ago. Gopher tortoises are native to the southeastern United States and can be found in all 67 counties of Florida. You may have even seen them waddling around Marco Island.

“It was fun to celebrate Gopher Tortoise Day with the pre-K’ers at St. Marks and kindergartners at Tommie Barfield,” said Chustz. “Their excitement is priceless for spreading the word to help protect one of the oldest Marco Island natives!”

Gopher tortoises can be found all over Marco Island, with the largest concentration residing in the Estates section, as well as on Sheffield Avenue and Dogwood Drive. The most recent census of their population was done in 2011 and found that approximately 300-400 tortoises call Marco Island their home. They live in burrows underground in the sandy, empty lots and sometimes on residents’ properties. In some instances, their tunnels have been found to be as deep as 10 feet and as long as 40.

The gopher tortoise is known as a “keystone species.” The burrows they dig provide shelter for more than 350 different species, making them a vital element of our island ecosystem.

Unfortunately in Florida, gopher tortoises, like the burrowing owls, are currently listed as a threatened species. The tortoises and their burrows are federally protected, meaning tampering with or destroying them is illegal, so don’t do it! Though, according to Chustz, their biggest threat right now is habitat loss.

The Gopher Tortoise Council in conjunction with the Florida Fish and Wildlife Conservation Commission created Gopher Tortoise Day as a means of increasing awareness, and as well as an appreciation for the reptiles. As of now, seven counties throughout Florida have officially adopted April 10 as Gopher Tortoise Day. They include: Alachua, Brevard, Charlotte, Collier, DeSoto, Indian River, Sarasota as well as the cities of Cape Coral, Flagler Beach, Melbourne, North Port and Venice.

Coastal Breeze News also talked to volunteer and self identified “concerned citizen” Maria Lamb who is very knowledgeable on the subject of tortoises. She roams the Estates looking for deceased tortoises and keeps a vigilant eye on their burrows. In terms of protecting the species on Marco Island, she has a few suggestions. First of all slow down when driving in the areas of Inlet, Ludlow, Copeland, South Barfield, Indian Hill, Caxambas Drive and Key Marco as those are populated tortoise areas. But she warns, do not risk your life trying to move a tortoise. She says the best thing you can do for a tortoise is to leave it alone.

If you see a tortoise or its burrow in trouble please call the Florida Fish and Wildlife Conservation Commission hotline at 1-888-404-3922 to report a violation. They take calls 24/7.

Chadd Chustz is the City of Marco Island Environmental Specialist. He can be reached at 239-389-3949 or by email at cchustz@cityofmarcoisland.com.