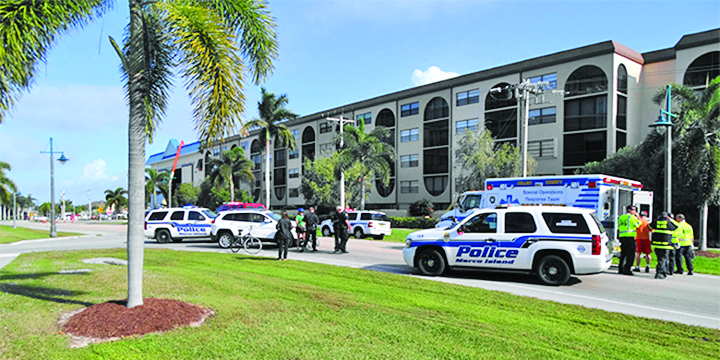 Captain Nick Ojanovac of the Marco Island Police Department urged residents and visitors to be especially alert now that season has arrived and the roadways are much busier. “Our motorists and others riding bicycles, motorcycles and other recreational means of transport, in addition to pedestrians, need to be aware that the intensity of traffic and potential for accidents has increased.”

Captain Ojanovac’s comments were made immediately after a motor vehicle/bicycle collision at the intersection of Elkhorn Court and Bald Eagle Drive. Marco Island Police Department and Fire Rescue personnel were dispatched to that accident scene at 10:15 AM on the morning of January 3.

“We were fortunate that no serious injuries resulted from that accident, but that will not always be the case,” said Ojanovac. “Drivers, pedestrians and cyclist all have a responsibility to ride and drive safely to insure we can avoid any tragedies during 2017.”

That was not the case early Monday morning, January 2, at approximately 4:46 AM when a single car crash caused two individuals to be critically injured and airlifted to the trauma center in Ft. Myers. Their vehicle struck a utility pole on San Marco Road north of the Goodland Road intersection. One of those individuals was ejected from the vehicle and was not wearing a seatbelt.

Ojanovac also cautioned drivers to be aware of a no-tolerance philosophy regarding DUI, not only on the island, but throughout Collier County and the State of Florida. “Unfortunately we still see alcohol related crashes and resulting injuries and deaths on the highways. Cabs are cheap on the island and many of our restaurants offer complimentary transport if one thinks they might be smart to come back for their vehicle the next day,” said Ojanovac.

Ojanovac also pointed out that a typical DUI could cost a driver upwards of $10,000 and result in other penalties. “A $7 cab ride is a smart choice, rather than face the potential consequences.”

For more breaking news on Marco Island and the surrounding areas log onto the Coastal Breeze News website at www.coastalbreezenews.com.