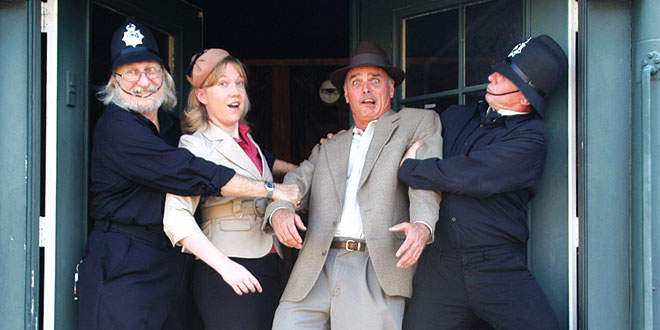 Nestled in Marco Island’s Town Center Plaza, The Marco Players’ theater sits waiting to be filled for its next show; for laughter, for tears, for the next story to come alive inside its walls.

Now in its 38th season, the Marco Players is a non-profit theater company that began putting on productions in hotels, churches and other borrowed locales. It eventually found the Town Center Plaza space and has made it home for the last thirteen years. The theater is run by a board of directors, all very hands-on in their involvement, whether it be financially or otherwise, and the theater company is a charitable organization. The participants—the actors, the crew—are all volunteers, taking time out of their lives for a six-week rehearsal schedule, two weeks of stage rehearsal, and 15 performances per show. Running 60 performances per season, each show takes around 50 to 60 people to make it run, including carpenters, stage hands, make-up, cast, crew, lighting,

A scene from The 39 Steps opening night. SUBMITTED PHOTOS

box office attendants and volunteers to pass out refreshments during intermissions.

The plays are chosen by a play reading committee of about six members, who go through around 35 plays each season and narrow them down. This committee chose the Players’ most recent production, “The 39 Steps,” which ran from January 9 to 27.

Written by Patrick Barlow, “The 39 Steps” is based on the Alfred Hitchcock film of the same name and plot, which was based on the novel by John Buchan, and centers around Richard Hannay. In it, Hannay finds himself mixed up with spies and wrongful accusations, all beginning when he meets a girl, only to have her promptly get stabbed to death by a butter knife—and that’s only in the first scene! Played by a cast of four in myriad roles, the story travels countries and genres—murder mystery, romance, and unabashed comedy.

Directed by Ann Megna, the play was quirky and fun, with a sweet ending and humor abound. 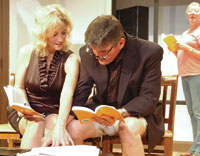 This photo was taken during the rehearsal of Plaza Suite

The local stars were Michael Sean Johnson, in his acting debut as the play’s main protagonist Richard Hannay, Sarah Poston, Rich Nepon, and Carlton LaVain Sizer in his first production with The Marco Players. The quartet was perfectly on point, funny and endearing, and Carlton was a true gem to the stage, hamming it up with his antics as the audience pealed. The story itself was one well-worth watching, full of laughs and odd situations.

The Marco Players also offers Lunch Box Series performances and a children’s theater. For more details, or to make a donation, visit www.TheMarcoPlayers.com, or visit the Box Office at the Marco Players theater.