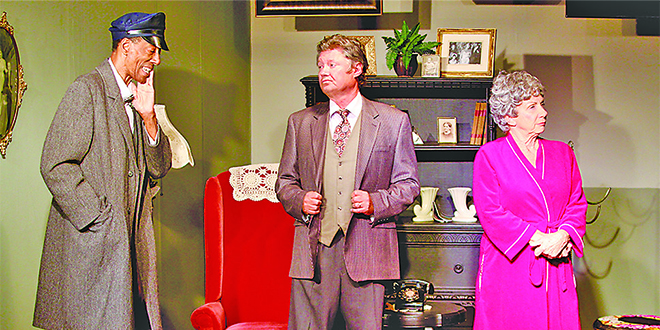 The Marco Players tackled a popular and familiar subject when they took on “Driving Miss Daisy” this winter.

“Driving Miss Daisy” won four Academy Awards in 1989, including Best Picture and Best Actress (Jessica Tandy). Taking on a subject your audience is so familiar with could have backfired on the local theatre group.

But the three thespians who carried the play certainly earned the respect of the sold out audience during their March 31 performance at the Marco Players Theater in the Town Center Mall.

Marco Players veteran Marilyn was convincing in the role of Miss Daisy. Newcomer Don Manley, in just his fourth play, was a terrific Hoke Coleburn—delivering a performance that would have made Morgan Freeman proud. Jay Terzis, who has worked as a Broadway play critic, would have had to give himself a good review for his job as Daisy’s son Boolie Werthan. Terzis is a retired orthodontist. Both Terzis and Manley are Marco residents.

The players enjoyed enthusiastic applause after every crisply-performed act throughout the evening. Virtually every scene brought back memories of the heartwarming movie for the audience.

“One of the reasons that I fell in love with this play and wanted our audiences to experience its message was because it touches every aspect of our lives,” said director Beverly Dahlstrom, who is the president of the board of directors and artistic director for the Marco Players. “It is the story of our lives.”