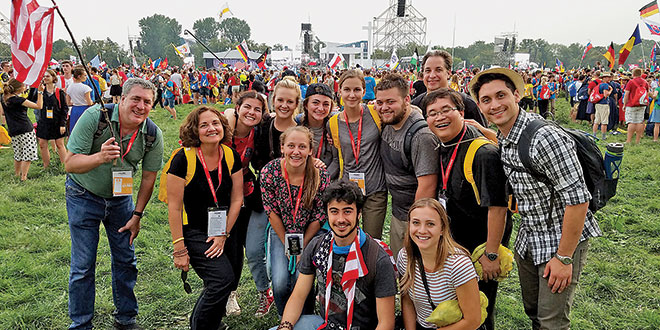 United in friendship: San Marco pilgrims and pilgrims from China.

first official WYD was held in 1986. Today WYD is a week-long gathering in the celebration of faith. Those who attend are referred to as pilgrims, coming from every corner of the world. A vector of peace, the event itself has been described as a “weapon of mass construction.”

The word “catholic” is defined as “universal in extent; involving all.” Kim Adamson, director of religious education at San Marco Catholic Church said, “Pope John Paul II created World Youth Day to show our youth that they are not alone. They are part of a universal church.” Although WYD is organized by the Catholic Church, youth of all faiths are invited to attend, making it a truly universal encounter with Christ.

The itinerary for the pilgrims from San Marco Catholic Church was indeed a busy one. It included the celebration of Mass at St. Maximilian Kolbe Church in Niepokalanow, a trip to Auschwitz, attendance at the Papal Welcome for Pope Francis in Blonia Park, and the solemn devotion of the Way of the Cross, commemorating Jesus Christ’s

last day on Earth as a man as he carried his cross to Calvary for his crucifixion.

San Marco Catholic Church carried two live streaming events from World Youth Day showing the Papal Welcome and the Way of the Cross, led by Pope Francis. The Papal Welcome at Blonia Park included the Procession of Flags, a tradition of every WYD. Amidst hymns of praise, posters were presented on stage, depicting one person from each continent who is considered to be a worker of mercy. The honorees were selected by the youth themselves by way of social media, and included Blessed Mother Teresa of Calcutta and St. Vincent de Paul. The youth gave a spectacular portrayal of nine selected young Catholic saints and blesseds, bringing their images to life, sending the message that even the very young can become saints. In celebration of the Liturgy of the Word, the Gospel was read in both the Latin and Byzantine rites of the Catholic Church.

But the most resounding message came from Pope Francis himself. He welcomed the cheering

At San Marco Catholic Church, a blessing before the journey. Submitted Photos

crowd by saying “At last we are together!” He went on to say, “We are celebrating Jesus who is alive among us. What better way to build your friendship with Jesus than to build friendships with each other!” Set against the backdrop of a portrait of the Sacred Heart of Jesus, and the images of Pope John Paul II (now Saint John Paul II) and Saint Faustina, a Catholic nun from Krakow who inspired the Catholic devotion of The Divine Mercy, Pope Francis encouraged the audience to celebrate the “contagious joy of the Gospel.”

“Mercy always has a youthful face,” the Pope said, adding, “Mercy is the part that can never be taken away from us.” Pope Francis asked the question, “Empty thrills or the power of grace? What do you want?” He replied, “There is one answer. It is not sold. It cannot be bought. It is a person. His name is Jesus Christ.” In further words of encouragement and grace, the Pope said, “Jesus is always there when we fall. Jesus is a

gift from our Father for everyone. Jesus inspires us not to settle for less, but to give the very best of ourselves.” Before his closing blessing, Pope Francis added some further advice. “Seek out your grandparents,” he told the youth. “They have a wisdom of life. They will tell you things that will fill your heart.”

The Way of the Cross included the collective effort of several pilgrims from around the world carrying a large cross, as prayers and hymns were recited. A simultaneous enactment took place as a lone individual struggled to carry a cross on an incline of stairs, continuously falling, but getting back up to continue the climb.

As I wrote these words, World Youth Day was still taking place. Our pilgrims from Marco Island had not yet returned. But I know in my heart that when they do, they will tell us that they encountered the face of God; our God of mercy. At a time when the world is faced with violence, hatred and evil of every kind, in seemingly every place, World Youth Day fills us with hope.