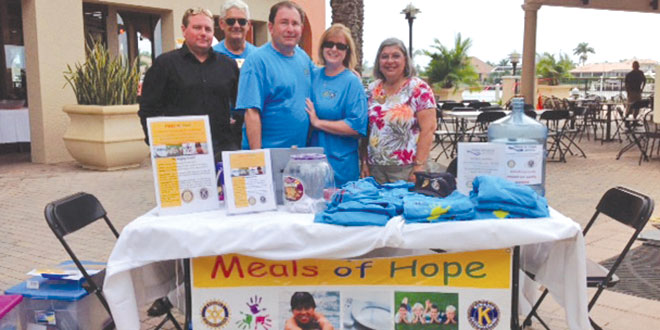 Neil “Captain Hope” Snyder has been busy this year.

Since February, the local attorney and chairman of the annual Marco Island Meals of Hope packaging event has held seven After-Five gatherings at island restaurants to help raise the $45,000 necessary to fund the 2015 packaging extravaganza, which is set for Saturday, Nov. 15, at the Marco Island Charter Middle School gym from 9-11 AM.

This year, Snyder is challenging the volunteers to package 200,000 meals. “Once the process starts, you have these people so engaged in giving back that it becomes like a machine. It is awesome,” he adds.

On the menu for this year’s event, mac and cheese dinners fortified with soy protein and 21 vitamins and minerals.

The brainchild of Rotarian Steve Popper, Meals of Hope is a Naples-based 501(c)3 that packages and distributes meals through a network of U.S.-based food banks called Feeding America. Although a great deal of the food is distributed throughout the five counties serviced by the Harry Chapin Food Bank of Southwest Florida, Meals of Hope is responsible for feeding people from Florida, Georgia and North Carolina to Ohio, Illinois and Michigan.

Since its inception in 2007, Meals of Hope has packed almost 18.5 million meals. Last year, it packaged close to 4 million meals, and approximately 1.5 million of those were distributed in Collier County.

The recovering economy and the developing status of the “working poor” has made the plight of Collier County’s food insecure population even more dire. These people may work, but are forced to make the tough choices as to how to spend their money. Buy food? Pay rent? Go to the doctor and get medicine? Keep the lights on? For them, there is not enough to cover everything, and they have to choose what to pay for.

As a result, a growing number of kids also are participating in the free and reduced-cost breakfast and lunch program through 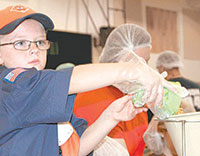 Collier County Public Schools. Last year, 61 percent of children enrolled in Collier County schools were part of the program, which equates to about 27,000 students. However, school officials believe the number is probably 10 percent higher, as middle and high school students are hesitant to sign up for the program.

With the holidays fast approaching, the need becomes even greater but not for the reasons some may think. Much like during the 11 weeks of summer vacation, the two weeks of holiday break from school leave a lot of children who usually receive breakfast and lunch at school — and their parents — searching for food elsewhere.

The fundraising efforts of Snyder and his “Hope Warriors” have been aided by a number of local restaurants, including CJ’s on the Bay, Marco Island Brewery, Stonewalls, Old Marco Pub, Porky’s, Marco Island Seafood (formerly Captain Brien’s Seafood and Raw Bar), Konrad’s, Snook Inn and Mario’s. Each have held After-Five events in preparation for the Nov. 15 packaging event.

Two more events are on the fundraising schedule. A 50/50 event will be held at Stan’s Idle Hour in Goodland on Sunday, Nov. 2, followed by the final After-Five on Monday, Nov. 3, 5-7 PM, at Speak Easy of Marco Island.

“We have a lot of community support,” Snyder says. “People on Marco enjoy the beautiful lifestyle that Southwest Florida offers. At the same time, there are a lot of people in need. The community has a desire to give back and show their appreciation by giving back.”

To be sure, he is grateful for the support: “Our fundraising goal is not just for this year…You never want an empty pantry. It is a never-ending goal. The goal is to have money to start next year as well.”

As always, Snyder is looking for at least 500 volunteers to show up ready to assemble the meals. He has put the call out to the Sunrise Rotary Club, Noontime Rotary Club and Kiwanis Club, as well as schools, churches and organizations in and around Marco

Volunteers are encouraged to pre-register online at www.feedcollier.org and to arrive by 8:30 AM the day of the event. While there is no fee for the event, donations are encouraged and welcomed.

More information is available at www.feedcollier.org.