Marco Optimists Clean up in Orlando 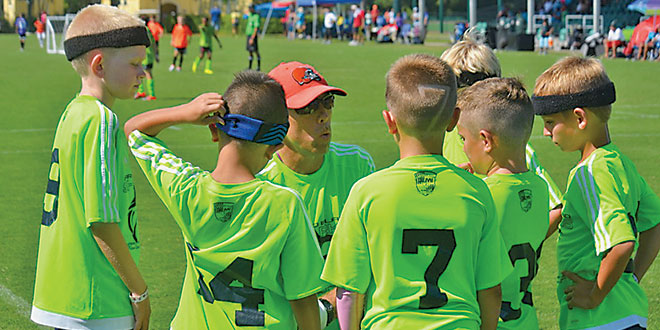 Coach Jim Watt fires up his U10 team up before the big game. As always, he has their undivided attention.

Jim Watt is the volunteer varsity soccer coach at Marco Island Academy. He is the only coach the team has ever had. His daughter Olivia, now a junior, is a star on the team. Olivia has two younger brothers, Jake, at Tommie Barfield Elementary School (TBE), and Jonathan at Marco Island Charter Middle School (MICMS), both soccer players par excellence. Watt is national sales manager for a thriving family business, King’s Company (commercial lumber), which has now gone global. He is constantly on the road keeping his customers happy and signing up new ones. In order to spend more time with all three of his kids, when he is home, Watt took another volunteer job with the kids’ soccer leagues in Marco Island, first with Surge and this year with the Optimists (OCMI). “I figured this would be a good way to keep the kids off the street, and give them something constructive and healthy to do,” Watt told me. His three children are on three different teams corresponding to their age groups. Although each of his three teams has a complement of six, less than half this number usually shows up for practice. The kids are dependent on their parents to get there, and there are those pesky summer vacations to contend with. The kids that do show up become part of a perpetual motion machine, engaging in fast moving drills, interspersed with ad hoc instruction by Coach Watt. Despite the heat, sweat, aches and pains, these kids love their coach and have bought into his program. I have never heard a complaint from any of them. When Watt can’t make it, the kids conduct their own practices, planned by Coach Watt beforehand and run by Olivia Watt.

Coach Watt enters his teams in various recreational and comp league tournaments throughout South Florida, with increasing success. The kids give a good account of themselves and almost always end up on the podium. For the past two 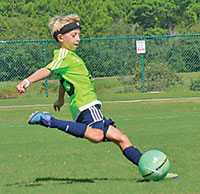 Jake Watt, about to boom one downfield. Jake assisted on three of his team’s four goals in the championship game, the last assist breaking a tie as the clock ran out. Photos by Jane Watt

years however, the tournament they all look forward to is Disney World’s 3×3 (3 against 3) held at the ESPN Wide World of Sports facility in Orlando. It is a national tournament, with each team bringing six players (with one notable exception). This year, it was played on July 29, 30, and 31. Including family and players, about 50 Marco Islanders went up for the tournament. Dave Vergo, the owner of Accurate AC, with two sons on the U13 team assisted Watt with the coaching duties. “I couldn’t do this without Dave’s help,” said Watt, “Sometimes, we have two teams playing simultaneously. I take one, Dave, the other.”

The tournament got underway on Friday, July 29, 8 AM sharp. The OCMI teams styled themselves, The Marco Island Sharks. They lived up to their name. The U10s, consisting of Andrew Esperanza-Nava, Nick Gionet, AJ Hobbs, Lincoln LaButte, Alex Macko, and Jake Watt, took first place in the Recreational Division. Last year, with essentially the same group, they could do no better than 4th. These kids had been showing up to practice with surprising regularity. They leap, bound and sprint through two-hour practice sessions in blazing sun and stifling humidity. This year, Watt was pushing them even harder. “You’re not going to rest until these guys are a first place team, are you?” I asked. “I hope not,” replied Watt, grinning from ear to ear. Perhaps the most remarkable boy on this team of 10 year olds is Jake Watt, the coach’s son. He is the most feisty and competitive kid I have ever met. He hates to lose, and has only two speeds – faster and fastest. He brings to mind a water bug, which most people couldn’t catch, even in a bathtub. In a 3 on 3 game, there are just not enough defenders to contain this tow headed blur. He seems to be everywhere at once. Jake has scored a ton of goals in competition this year, but what gives him 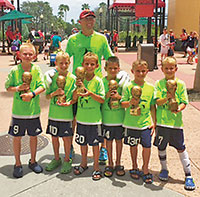 the most satisfaction is assisting a teammate’s score. “Yeah, I would rather get an assist than a score,” Jake told me, “A pass to a teammate is much harder.” Jake was to get his wish, in spades, in the championship game. Out of the four goals his team scored, Jake had three assists and a goal himself. The U10s had to compete with nine other teams and in fact were undefeated going into the championship game on Sunday. The teams were evenly matched and AJ Hobbs kept the Sharks in the game with two first half goals. With seconds to play, the score was tied at 3-3. The opponents started a desperation attack with a pass to a player heading down field. Jake streaked in to block the pass and steal the ball. With the clock running down, Jake turned on the afterburners and raced down field. At the last moment, before time expired, he found teammate Andrew Esperanza-Nava for the winning goal. Pandemonium ensued. Parents rushed on to the field to hug the kids, Alex Macko did a back flip, and after shaking hands with the losers, the team took a joyful victory lap, high fiving all their fans. “I was too excited for words,” said Jake of his heroics, “Everyone on the team helped each other and that is why we won.”

The U13 team of five boys and a girl had tougher luck. The team consisted of Armando Anaya, Kevin Jungo, Kirra Polley, Matthew Vergo, Nicholas Vergo, and Jonathan Watt. They competed in the tougher Comp Division, most of whose teams have paid coaches and player tryouts. There was a lot of talent on this team, but they managed only a third place, after finishing first last year.

The U16 girls’ team consisted of Teagan Havemeier, Hailey Karp, Elizabeth Schultheis, Julia Wagner, Olivia Watt, and Danya Zarate. After losing the first game by a last second goal, the team rallied to win all the rest for a first place finish. 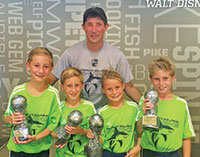 They crushed their opponents in the championship game 8-0. It is worth noting that five of these girls will be starting for Marco Island Academy this year. Should be quite a season.

The most unlikely OCMI entry in the tournament was the U9s. All of the players and coaches on this team had the same surname. Just four players were registered. Thomas, 9, Wyatt, 9, Christopher, 9, and Jackson, 7, were the sons of Tom and Meghan Bonos, who were also their coaches. Meghan also happens to be the president of OCMI and responsible for its soccer operations. (OCMI also has a flag football program.) All the boys, the triplets plus Jackson, were eligible to play on the U9 team. (Grace Bonos, 4, did not make the team.) Tom Bonos, assisted by Meghan, had been coaching them in the OCMI Rec League for about a year. Players’ attendance at practices would not have been a problem for these coaches. Playing with only one substitute in 90-degree heat was. The boys tended to wilt when they had back-to-back games, and split their first day’s games. On Saturday, they managed to win both games, scoring six goals in the second half of the 2nd game, after being behind 4-1 at the half. In Sunday’s semifinals, the game went in to overtime, with the Sharks finally coming out on top. In the second game of the day, the championship game, the Bonos boys were clearly exhausted, but put up a good fight, losing 6-4. “For the championship game, they were down early and just ran out of gas,” Meghan said, “?I think they played their hearts out and left it all on the field in the semi-finals.”

So, how well did our OCMI boys and girls do up in Orlando? Competing against 29 teams from six states, fielding a total 154 athletes, the OCMI teams brought home 2- firsts, 1- second and 1- third. Their teams were on the podium in every award ceremony. Congratulations Sharks, for a job well done.