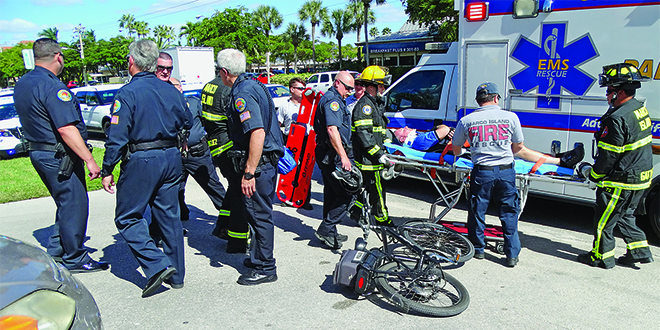 Marco Island Emergency Services personnel work together as a seamless team to assist island residents and visitors on a daily basis. However, when the alarm comes in for one of their own their adrenaline levels spike a little higher as they respond to a brother
in need.

Such was the case on late Tuesday morning, November 8, when fire/EMS and police units were dispatched to a call regarding an officer involved vehicle accident with injuries, at approximately 11:30 AM in the vicinity of 606 Bald Eagle Drive.

Police Officer George Guyer was on patrol with the department’s motorized bicycle when he was struck by an automobile exiting the driveway at 606 Bald Eagle. Units 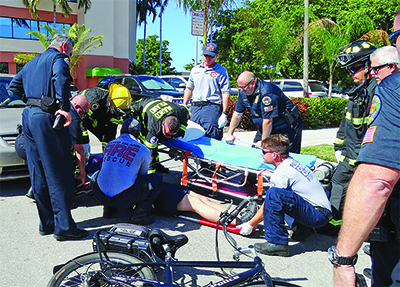 from Marco Island Fire Rescue, Police Department and Collier County EMS responded to the call and found Guyer on the ground in front of the motor vehicle, having been thrown off the bike and onto the
pavement.

He was transported by Collier County EMS to Physicians Regional Hospital where he was subsequently treated and released. Marco Island Police Chief Al Schettino accompanied Guyer to the hospital, and transported him back to Marco when he was released several hours later.

“George’s nickname of ‘Lucky’ had some additional meaning today, and we are all thankful for the fact he wasn’t more seriously injured,” said Schettino. “Our fire rescue personnel, the Collier County EMS, and our own officers should be commended for the professionalism shown today in response

to this incident, which could have been a real tragedy,” concluded Schettino.

The Collier County Sheriff’s Office was called upon to investigate the accident. “This is standard procedure with an officer involved incident,” said Captain Nick Ojanovac, who is the Operations Chief for the department.

Ojanovac also cautioned motorists to be especially aware of pedestrians and bicyclists as we approach the busier time of the year on the island.

Many on the island quickly reacted with concern for Guyer, as word spread of the incident.  “I can’t tell you how relieved we all are to hear George wasn’t seriously injured,” said City Council Chairman Bob Brown.

As soon as more information is available in regards to the investigation, it will be posted at www.coastalbreezenews.com.