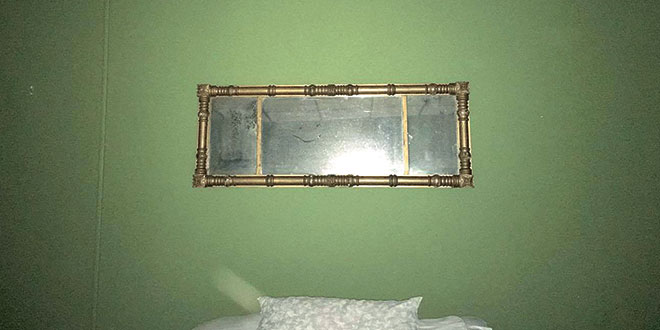 Photo by Samantha HustedAt the top of the stairs we entered a bedroom and tried to capture images of orbs.

Last month I sat down with Gina Sisbarro, “Men of Rushmore and Their Wives” writer and director. Gina has been directing and acting for over fifteen years. Three years ago Gina, always one for the dramatics, created Marco Island’s first ever ghost tour. It’s been running successfully ever since.

The Marco Murder and Mayhem tour stems from Gina’s love of history and the paranormal. The tour highlights the lesser-known and darker history of the island. Although Gina was pretty tightlipped about most of her stories, she did let me in on a few secrets. Gina took me on a mini tour of the Old Marco Inn where we took pictures of orbs and explored the off limits upstairs area. It’s there that she says she gets the most paranormal activity. We talked about her inspirations behind the tour, and she gave me a behind-the-scenes look on how it’s conducted.

How did you come up with the idea to bring a ghost tour to Marco Island? What was your inspiration?

Well, what you probably didn’t know is that my oldest daughter has a gift. It started when she was younger. When I visit different towns I would go on ghost tours because I’m a history buff. So she and I went on ghost tours and my daughter just started saying things like, ‘Don’t you see that?’ I wasn’t sure if she was really seeing ‘stuff’ or it was her imagination running wild. As she got older, her gift developed where she would be able to sense them. She could tell me exactly what they looked like and what they were saying to her. We’d go antiquing, which is another one of my hobbies, and she would tell me who’s standing next to the furniture, their characteristics and what period they were from. My interest peaked; I’m fascinated by the paranormal so I decided, why not? I would be the only ghost tour in 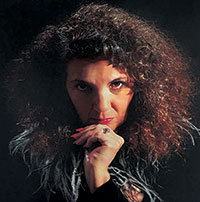 Collier County. I can be quite the storyteller, so I combined my love of acting, history and the paranormal, and created the tour!

I contacted Craig Woodward, our local historian, just to see if there was anything here on the island, and he told a few good tales. I built on it from there. It took about a year to put it all together. After the tour, I turn our history fanatics into believers. There have been a lot of sightings on the tours through their camera lenses.

Marco Island seems to be surprisingly receptive to the idea of a ghost tour. How did you get it up and running?

What I did was an experimental tour with Mindy and Lola through the city Parks and Recreation Department. We offered two ghost tours with their van filling to capacity. At that time I dressed up as a pioneer woman. In the beginning most of my stories were early pioneering stories, so I dressed as a character from that time period. Then I realized I wanted to be a little creepier. I developed my character Martha Horror. I was making a play on Mata Hari. Mata certainly capitalized on her assets and talent. It was the end of her dance career that led her to the life of a courtesan. She’s English and from Jersey. What’s great about playing her character is that I can say whatever the hell I want. It’s separate. Gina is the tour operator and the business professional and Martha is the hired help with whom Gina can’t make it without! I can’t fire Martha!

Could you tell me a little more about Martha Horror? What’s she like?

Oh, she’s really snarky. She’s very snide, sarcastic and comedic. With every new tour you have to gage your audience. So if you have people who are coming out for a good time (and yes, you’re allowed to bring alcohol) I play to the party 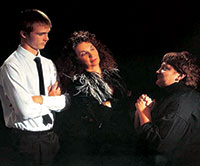 Martha Horror with her two assistants: Edmund Mortimer Ludwigsen III, aka Eddy Ludwigsen, and RyanSullivan as The Creature.

crowd. But if I’ve got a group that’s really into the history, I’ll crack my jokes but play it more straight. It’s just like acting, when you walk out on stage you know within minutes what your audience is like. What’s really hard is when you have that mix. I also have two assistants, Eddy Ludwigsen, who plays Edmund Mortimer Ludwigsen III and Ryan Sullivan as The Creature. They feel like my own two sons, they know Gina and Martha very well!

I have to admit, Martha can get caught off guard sometimes by the paranormal. I’ve seen some incredible images. Once I saw an orb walk towards a door, turn and go into a room. When I saw it, I broke character. I believe I said, ‘Whoa, did you see what I just saw?’ in my native New Jersey accent.

Could you take me through how the tour works? Maybe share a story or two?

When you first come on the tour you’re going to get an explanation for what everything is. What the difference is between a poltergeist, a ghost and a spirit. You’re going to get the back-story. Then, when we get to the location, I’ll tell them what type they will meet. Fortunately there are no poltergeists. Not yet anyway.

We meet at the Old Marco Inn and then hop on the bus. There are only five locations that I choose to take you, but there are certainly more. We do get on and off the bus. One stop is an urban legend and I sort of throw it in your lap and you can believe it or not. There are some truths to it definitely, but did it exactly happen that way? We don’t know. We hit two cemeteries, we go to the Otter Mound, and for the last stop we return to the Old Marco Inn, which is the most haunted out of all of them. In between I 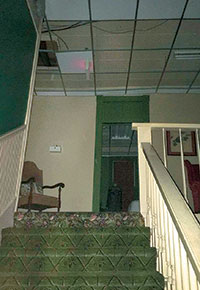 Photo by Samantha HustedThe Old Marco Inn is the Marco Murder and Mayhem’s most haunted stop.

do tell stories and urban legends.

What role does the Old Marco Inn play?

The Old Marco Inn was a boarding house at first. It became a hotel in the late 1880s-90s. There was no road into the hotel; it was surrounded by water. Later on there was a dirt road leading in and out. The great fishermen of their day came to this hotel. The majority of the guests were men. Well-to-do families would come through, back in the day, as it was a very expensive hotel. The grandest of the grand would come down to the Old Marco Inn. You definitely needed money and you definitely needed influence.

The spirit was an employee here. She was passing through with her family and fell in love and decided to stay. That’s all I can tell you. We talk to her and her lover, who are still here. Do I think there’s more up there? I do. There’s so much activity. When I started the tour I used to say ‘I can’t guarantee that you’ll see anything.’ This past year I’m now saying ‘I can guarantee.’

How did you conduct your research?

Some history from Craig Woodward, a few superstitious stories, and most of the bulk from the spiritualist I consult. What’s interesting is we’ve attracted other ghosts on the island because they know we’re out and about.

The Marco Murder and Mayhem tour runs twice a month from October through April. However, off-season if you have a special group such as a wedding party, conference, family reunion or club, Martha can accommodate. Bistro Soleil (partners in horror are Lisa and Denny Meurgue, owners of Bistro Soleil) offers a special dinner package for “Ghost Riders.” For $25 you get a three-course meal and they even came up with a fun “bloody” dessert. It has been met with rave reviews. Private tours run all season.