Marco Movies readies for its close-up 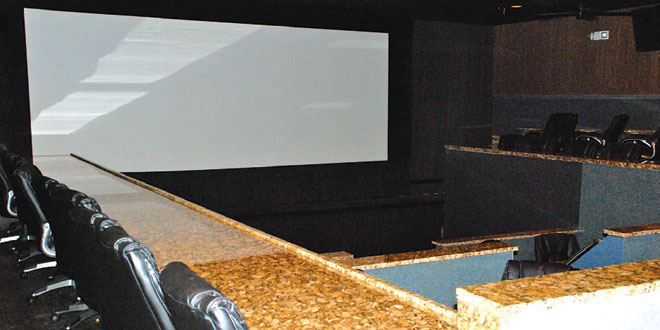 Marco Movies’ co-owners Nick Campo and Bill McMullan are looking forward to December 13, 2013. That is the day the nation’s first and oldest first-run, dine-in movie theater celebrates 20 years in business.

Campo has been preparing for the day for the last year. In 2012, he completely revamped the sound and projection systems in all four theaters, adding state-of-the-art Dolby Digital Sound towers and projectors. He also upgraded the cinema’s 3-D capabilities with the inclusion of Dolby Digital 3-D in theater 3. Now, he is renovating the interior of each theater. Gone are the familiar teal-colored wooden chairs and formica; replaced with new leather reclining stadium seats, new granite counter- and table-tops and new comfortable swivel chairs for table-seating. Installation of new lighting and burlap are next on the list.

“This is long over due,” says Campo, as he looks around Marco Movies. “I knew I was going to have to do this when I bought out my former partners two-and-half years ago. It has been quite an undertaking.”

To be sure, the overhaul was also totally necessary. Founded in 1993, Marco Movies quietly opened to island locals and visitors featuring first-print movies — basically hand-me-downs from the megaplexes of recently-released films. It also had a simple menu of sandwiches, hot dogs, chicken fingers and traditional movie theater fare.

Within six months, it landed its first first-run movie, Paramount Pictures “The Flintstones.” “Our booking agent, Annette Asher in Atlanta, said she thought we could be a first-run theater, even though we were in a small town,” Campo remembers. “We said

A party of five will watch a movie in comfort and style at this table. PHOTOS BY NOELLE H. LOWERY

He adds that prior to this, dine-in movie theaters had a reputation for showing dollar-movies and serving cheap beer and wings. Marco Movies was something altogether different. Thanks to Marco Island’s winter season and the theater’s modest size and expanding menu, Marco Movies was bringing in audience numbers that rivaled others in the industry.

Marco Movies’ success quickly piqued the interest of industry and movie executives. “Movie executives would fly here to come see what in the heck was going on here,” explains Campo. “They just couldn’t believe it. Just about all of those first (dine-in theater) guys came through our doors to see how we were doing it. We would get two or three phone calls a week for the first 10 years asking us for help.”

The last 10 years have seen a shift in the marketplace for small theaters like Marco Movies, though. In fact, not only has there been a proliferation of 10-12 screen, first-run, dine-in theaters, but the industry heavy-weights also have dove into the business. According to the National Association of Theater Owners (NATO), there are roughly 400 cinema eateries located throughout the United States today out of a total of about 5,750 theaters, and some of the newest are owned by Regal Entertainment Group, AMC Entertainment Inc., IPic Entertainment and Cobb Theaters.

There also is the industry’s technological switch from analog and 35 mm film to digital sound and projection. The Motion Picture Association of America reports that in 2012 the number of digital screens increased by 31 percent nationwide, accounting for 84 percent

Campo jokes that the switch certainly has made a difference in his projection rooms. Now, instead of 18,000-20,000 feet of 35mm film draped throughout each small space for a 90-minute movie, he just plugs in a hard-drive sent to him by the movie distributors into the server. Add black space for lighting changes and three trailers, and the movie begins. When it ends, there is no need to rewind. The whole system resets in just 10 seconds.

“This was all a necessary evil. We have been told that by the end of 2014, there will be no more 35mm film. The president of NATO said plan on how to go digital or plan on how you will exist the business,” notes Campo.

With the writing on the wall, Campo knew the 20th anniversary of Marco Movies would be the best time to give his cinema a total makeover. The theater renovations will be complete soon, and then, it will be time to construct a new six-television screen, multi-media center at the entrance of Marco Movies. Here, movie posters, schedules and trailers will be displayed.

Time and budget constraints will force the final stage — carpet replacement — into 2014, but other than that, Marco Movies will be ready for its close-up on December 13. Campo and McMullan want to hold a special event for residents then.

“We love all of our customers,” says Campo. “We really want to celebrate this one with our residents. If not for them, we wouldn’t be here.”