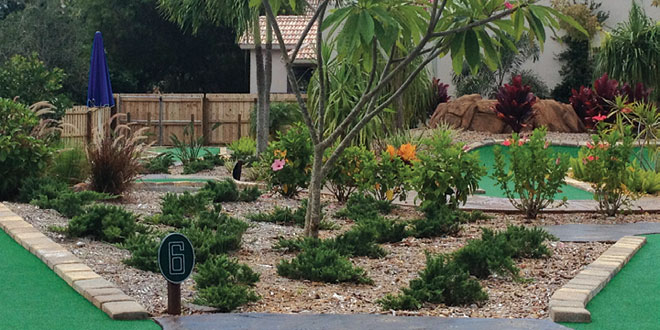 A new wrinkle has appeared in the ongoing legal conflict over Marco Golf & Garden.

The fate of the .25-acre miniature golf course on Winterberry Drive has been in question since January when the Marco Island Civic Association sued property owner, Donna Di Promessa LLC, for violating the property’s deed restrictions and for not submitting development plans for the golf course to MICA’s Architectural Review Committee for approval before construction started.

Since then, Collier County Circuit Court Judge Hugh Hayes signed a court order shutting down the mini-golf course and requiring Donna Di Promessa LLC, which is owned by Marco Island attorney Fred Kramer and his wife, Marianne Tirri Kramer, to return the property to pre-construction conditions. The Kramers have filed a motion for the trial court to reconsider its ruling.

While the court mulls its decision on the appeal, though, new claims have surfaced that the deed restrictions MICA claims to be enforcing may no longer exist for the mini-golf property or for any of the 15 commercial properties named in the original deed restrictions for Marco Island. Questions also have been raised as to whether a civic organization like MICA can even be tasked with enforcing deed restrictions.

According to Kramer, “the declaration of restrictions originally governing the miniature golf course site allows for a majority of the subject property owners to vote to extinguish the restrictions, and a majority (of the property owners) has already voted to do so. MICA knows that, but it still maintains that it has the right to protect these property owners from the horrors of miniature golf bringing happiness to adults and children. Further, MICA apparently maintains that it has this right until early next year.”

At the heart of the issue are Marco Island’s deed restrictions, which were set into motion beginning in 1965 under a master plan for the island created by The Deltona Corporation and its then-owners, the Mackle brothers. Deed restrictions are highly-contentious in Florida, as they are specific clauses listed on a property’s deed that control and restrict the way property owners can use their own land.

USLegal.com notes that “often, developers restrict the parcels of property in a development to maintain a certain amount of uniformity.” This is exactly what MICA’s Board of Directors explains in a recent open letter to its members. The letter states that in Marco Island’s master plan the Mackle brothers “went so far as to specify uses for particular pieces of land… The Deltona Corp. created the deed restrictions to protect the integrity of the island and to assure conformity of all construction and setbacks in those geographical areas covered by the restrictions. The Deed Restrictions cover single-family residential, multi-family residential and commercial properties and apply to most of the island.”

Pursuant to the turnover agreement, MICA formed an Architectural Review Committee (ARC), which acts as an authority in the plan review process. Accordingly, “the restrictions state that no new structure shall be constructed without a review of the design drawings and written approval by MICA. MICA’s ARC has met on a regular basis since 1986 and continues to meet monthly to review construction plans for the areas covered by Deltona Deed Restrictions.”

While Kramer does not dispute this information, he argues it is moot for four reasons. In addition to his belief that the commercial property owners voted — per the declarations of the restrictions — to do away with the deed restrictions, Kramer also contends that many of the original deed restrictions are antiquated.

“The first of these restrictions was recorded in 1965, almost 50 years ago,” he notes. “The commercial restrictions expressly allow only certain businesses to operate. These permitted businesses include grocery stores without live poultry, millinery and furrier stores, radio stores, telephone exchanges, telegraph stations, and haberdasheries.”

Second, to Kramer’s knowledge, “prior to the commencement of construction of the miniature golf course and gardens, neither Deltona nor MICA was ever involved in reviewing any of the building plans for, or any of the business uses on, any of the 15 commercial properties in the specific restrictions originally governing the miniature golf course site. To better understand this point, we have requested MICA produce its records on the issue, but it has refused to do so.”

Finally, Kramer disputes that MICA has the authority to enforce the deed restrictions. “Simply, MICA existed well before any assignment from Deltona and its original purposes did not include, and were far from, policing private property rights through the restrictions,” he argues.

Still, MICA and its board of directors are confident they are well within their rights and purview when enforcing Marco Island’s deed restrictions. Bolstered by the court order handed down by Judge Hayes, MICA also has prevailed in past deed restriction conflicts. The most famous: MICA’s victory over Dr. Luc Christian Mazzini in 1999.

Mazzini owned properties on San Marco Road, east of Bald Eagle, and adjoining properties on Tahiti Road, and he wanted to build a two-story medical office on the properties, which had been rezoned from residential to commercial. MICA sued, claiming the project violated the properties’ original residential deed restrictions, and won.

“The residents of Tahiti Road were ecstatic when MICA successfully prevented commercialism from creeping onto their residential street,” MICA’s letter emphasized.

Even so, only time and the Collier County trial court will tell who is right in the case of Marco Golf & Garden. Kramer’s hope: “We anticipate that the court will at least allow a hearing on the motion.”